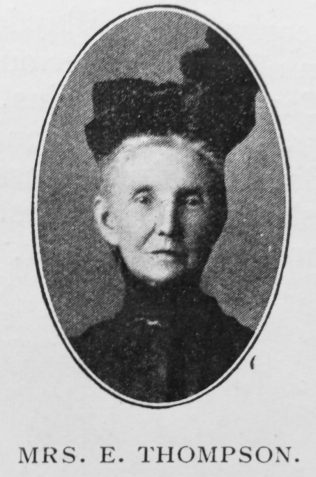 The passing of Mrs. Ellen Thompson has made a distinct gap in the Saul Street Society, Preston. Although she never occupied any public position, her life was so lived, so full of good works, that it may be said of her “Thou shalt be missed because thy seat will be empty.” Our departed sister was born at Shap-Fell, Westmoreland, August 24th, 1842. She soon united with our Church, and remained a consistent member to the end.

For over a quarter of a century she has shed an influence of a beneficent character, and the fragrance of a truly Christ-like disposition. Naturally retiring and unostentatious, she would never have sought any position whatever, but the young people loved her, and welcomed her to the Christian Endeavour meetings, and elected her Vice-President. To the last our lamented sister retained a youthfulness of spirit that was beautiful to behold. For long years she was a member of the Mothers’ Class in the Sunday School, and held the office of Treasurer. The Mothers loved her, and at the interment placed a beautiful Everlasting wreath upon her grave.

Mrs. Thompson has been an illustrious example of the Christian life lived in circumstances of great difficulty. The sorrows of past years were heavy, but they never darkened her outlook or quenched her faith. Indeed the keener the trial, the more conspicuously her patience and forbearance shone. Her own troubles taught her, and in the day of darkness she could comfort others.

The end of this gracious life came on the morning of February 6th, 1911. Her last illness was short and sharp—only a week—and full of triumph. We interred her on February 9th, after a most impressive service in the Saul Street Church. On Sunday, February 19th, the Rev. J.E. Leuty held a Memorial Service.

Eleanor (Ellen) was born on 24 August 1842 at Shap, Westmorland, to parents Joseph Richardson and Mary Castle. Eleanor’s mother died when she was quite your so she was brought up by an aunt and uncle, Thomas and Jane Pollard, inn keepers.

She appears to have had two children before her marriage. The 1861 census return records her as a housekeeper.

Note: Records identify her name as Eleanor, not Ellen as stated in the obituary.