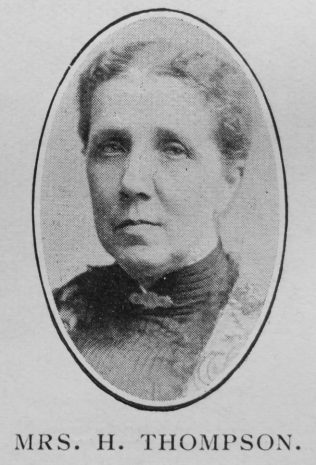 Transcription of obituary published in the Primitive Methodist Magazine by J.W. Grayson

Hannah Thompson has not long survived her sainted husband, Rev. Robert Thompson. She passed away suddenly and serenely at Boston on Wednesday, June 22nd. Her health began to decline after the death of her husband, and for lengthy periods she was confined to her home. When, however, she recovered somewhat it was her delight to attend public worship. Some three months before her death more serious symptoms manifested themselves, and her physician did not disguise the fact that death might occur suddenly. She had no fear of death, and her hopes of an immortal future were golden, but she had a rather nervous shrinking when she contemplated death. But God dealt kindly with her and she simply fell asleep.

Born at Market Rasen in 1843, the eldest daughter of Rev. Jacob Dawson, one of our pioneer ministers, she became a member of our Church in early years. She was married to Rev. Robert Thompson in 1869, by the Rev. Oliver Jackson,  and successfully assisted her husband in his work on the several Circuits upon which he travelled. Her life and experiences were thus mainly cast in the “heroic” days of our Church, and she had her share of the anxieties and toil incidental to those strenuous times.

She was the queen of her household, and to her fell a large and noble share in the upbringing and moulding of a numerous family. She had her reward in the devotion and love they bore to her, and the characters they sustain. She was interred in Old Leake churchyard on Saturday, June 25th, by Revs. W.E. Walmsley and J.W. Grayson, the first part of the service being held in the Boston Chapel, attended by local friends. On the Sunday morning following a memorial service was held at which the Rev. J.W. Grayson spoke sympathetically upon the life. and character of our departed sister.

Hannah was born in 1843 at Market Rasen, Lincolnshire, to parents Jacob Dawson, a PM minister, and Hannah Skelton.

Before her married Hannah worked as a straw bonnet maker (1861).

She married Robert Thompson (1837-1904), a PM minister, in the summer of 1869 at St. Neots, Huntingdonshire. Census returns identify ten children.