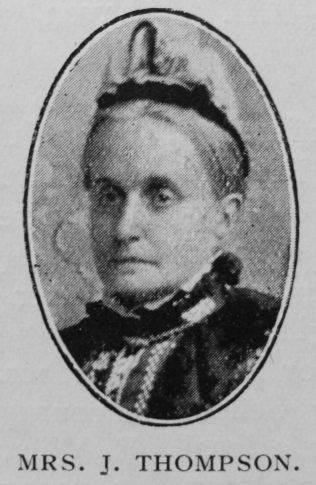 Transcription of obituary published in the Primitive Methodist Magazine by H.R.

It is almost impossible to speak of the subject of this sketch without reference to her saintly husband, Jabez Thompson, who died in 1909. Certain it is that she never recovered from the shock of his death, and on November 6th, 1911, she, too, passed to her rest.

They were both Primitive Methodists to the core, giving whole-hearted love and unstinted service to the Church of their choice, laying, in a time of difficulty, the foundations of better days. Born at Leicester, 1833, by her work for the Church she gave promise of future service.

After her marriage and removal to Rugby she laboured for her Master in many ways, notably in the choir and Sunday School. It was, however, as a class leader that her distinctive capabilities found greatest scope. Into the homes and hearts of her members she came as a ray of sunshine. Mr. and Mrs.Thompson’s home was always open to the servant of the Lord Jesus Christ.

Mary was born in 1833 at Leicester, Leicestershire. I have not been able to identify her parents in online records.

She married Jabez Thompson (1835-1909), a furniture dealer, in the spring of 1858 at Leicester, Leicestershire. Census returns identify two children.