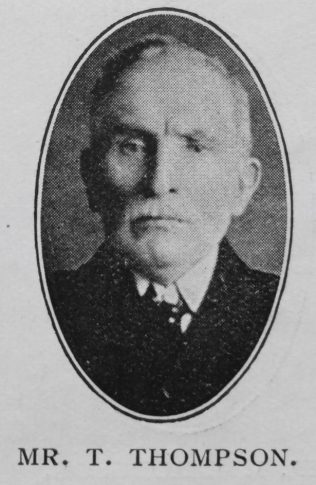 Bro. T. Thompson was born October 17th, 1845, at Whitwell, Durham. When about five years of age the family removed to Gateshead, where the remainder of his life was spent. As a boy he went to the Sunday School at Nelson Street, where he became a member. For over 20 years he was afterwards associated with our Sunderland Road Church. For more than 17 years he presided at the harmonium.

Throughout all these years he was a true friend, and a loyal, liberal member. His regularity at the means of grace was notable. A genuine Christian, kindly in spirit, upright in character, consistent in conduct, his Christianity was not of the demonstrative type. He was a man of only few words. But he had the root of the matter in him, and his life spoke more than his lips.

For 30 years he was a colliery official, and was trusted by his masters and widely respected by his workmen. In the large number’ who gathered together on the day of interment we had an evidence of the high esteem in which he was held, not only by the church members, but also by those outside. His quiet, godly life had made a deep impression on those who had come into contact with him.

As to his home life, Bro. Thompson was a faithful and beloved husband, and a most  affectionate father. His last illness was of short duration and the end came on April 6th. A memorial service was held in our Sunderland Road Church, and an address was given by the Rev. B. Haddon. His remains were interred in the Gateshead Cemetery on Sunday, April 10th. To the bereaved wife and family we extend our fullest sympathy, and we pray that the God of all comfort may be near to console and sustain them. Their’s is indeed a precious heritage, the memory of one who was faithful, devoted and true, ever loyal to Christ and his Church.

Thomas was born on 17 October 1845 at Whitwell, Co. Durham, to parents Thomas, a coal miner, and Sarah.