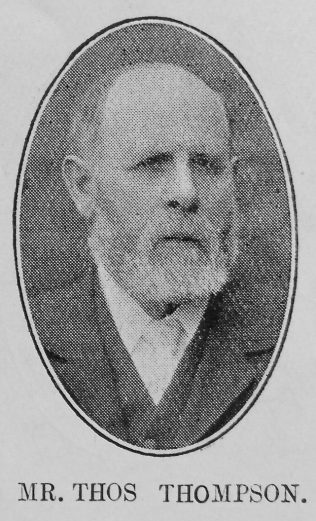 Transcription of Obituary published in the Primitive Methodist Magazine by E.E.

Mr. Thomas Thompson fell on sleep on January 19th, 1909, and two days afterwards was laid to rest in the Congregational Cemetery, Aspatria, amid every sign of sympathy for the bereaved and respect for the departed. A service was held in the Congregational Church, at which the writer paid an earnest tribute to the memory of so brave and loyal a Christian.

He was born sixty-two years ago at Blindcrake, near Cockermouth. His labours began early in life, but by a wise and careful attention to business he prospered. Withal there was a corresponding growth in Christian graces, as his decision for Christ was made in early manhood. Whilst health and strength remained he took a positive delight in attendance at the services, and when by reason of illness he was compelled to absent himself he rejoiced in the nearness of God and continued in sweet fellowship with his Saviour.

Thirty-nine years ago he formed a happy union with the brave woman who now mourns his loss. They resolved they would serve God let others do as they would. Their home became the centre of a beautiful Christian influence, and upon every member of the family there was bestowed the strictest yet most affectionate training for God and every good cause. ‘l’heir labours have not been in vain, for one son has for years been a very acceptable local preacher, whilst their daughter, the wife of the Rev. T. Pearson Ellis, is actively engaged in the service of our church.

As a trustee Mr. Thompson lavished both thought and means upon the beautiful edifice which it is our joy to possess. The Sunday School has been deprived of a generous friend, whilst in matters of a circuit character he always evinced a warm interest. With open arms he welcomed all God’s people, and heartily approved of their efforts to extend the Master’s Kingdom.

We have said farewell to all that was mortal of our departed friend. In the earthly home he is sorely missed, but with quiet confidence his loved ones await the glorious and never-ending reunion in the city of light.

Thomas was born abt 1847 at Blindcrake, nr. Cockermouth, Cumberland, to parents John, a husbandman (1851), and Hannah. He was baptised on 3 January 1847 at Isel, Cumberland.

He married Jane Thompson (b abt1844) in late 1869 in the Wigton Registration District, Cumberland. Census returns identify six children.