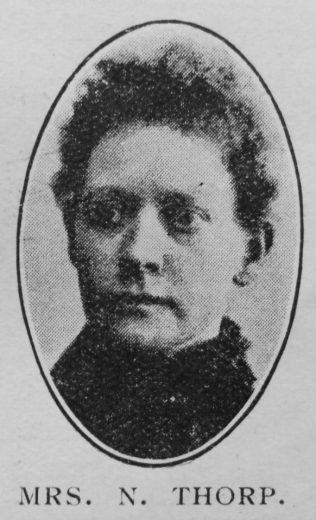 The Great Horton Church, Bradford, has just sustained a severe loss in the death of Mrs. N. Thorp—the wife of the Senior Circuit Steward. Born in 1853, of Godly parentage, our sister all through life, had been connected with the church here, and has ever been to the fore in every good word and work. Her husband in his loyal and devoted service for the cause, has ever found at his side a true helpmeet and into all his projects she heartily entered. In the home, which has always been open to our preachers, love real and deep quietly reigned.

For some years now she has not enjoyed good health, and during recent months has suffered much, but she bore all very patiently, and thought more of others than of herself. Within the last eight weeks both her mother (who was our oldest member) and brother were called away by death, and these were heavy blows for one so frail as she had become. But right to the end she maintained her brightness and cheerfulness, and was hopeful as to her ultimate recovery.

The All-wise and the All-good, however, willed otherwise, and on January 12th, with her loved ones around her, she very peacefully passed away to the Homeland. The interment took place on January 15th, when a large company of friends assembled in the church to which she was so devotedly attached. Loving hands had tastefully covered the Communion table and pulpit steps with beautiful flowers, and everywhere there were the marks of sympathy and regard.

The service was conducted by the Rev. J.J. Reeves, and the Rev. Jackson Harding paid a touching tribute to our departed sister’s worth. The Revs. J.C. Livesey and E. Vaughan also took part. The last rites at the graveside were performed by the Rev. J. Morrison.

She being dead yet speaketh.

Drusilla was born on 11 September 1853 at Great Horton, Yorkshire, to parents Thomas Capstick, a coal agent & Wesleyan local preacher (1871), and Grace E Winterburn. She as baptised on 18 December 1853 into the PM church.

Before her marriage Drusilla worked as a worsted weaver (1871)

She married Ned Thorp (1857-1946), an assessor and collector of taxes (1901), in early 1879 in the Bradford Registration District, Yorkshire. Census returns identify two children.