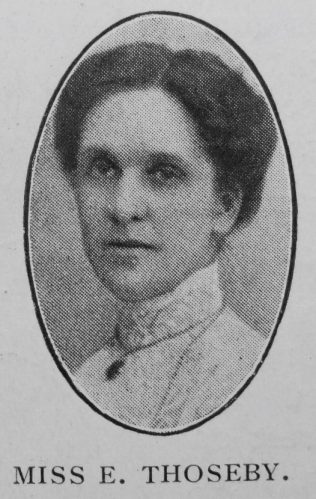 Transcription of obituary published in the Primitive Methodist Magazine by F.M.

Miss Ethel Thoseby, daughter of the late Rev. W. and Mrs. Thoseby, passed away on the 15th of June after a brief illness at the age of twenty-seven. At the time of her death she was serving our Church at Knaresborough in many capacities, and her place will be difficult to fill.

Her quiet, unselfish disposition endeared her to all who were privileged to be associated with her. Her character was to a large extent the product of a Christian home. It was there that her face was first set towards the light. Though she rarely talked of her religion, all that we knew of her bore evidence to the fact that she had “daily commerce with the invisible,” who taught her to surrender the lower for the higher. One of the outstanding features of her character was her self-forgetfulness. She never spoiled any task she had to perform by obtruding self into it. Her thought was always for others, and she gave generously of her best without any thought of a reward.

The amount of her work was never calculated. When she saw that something needed to be done, she did it. To her duty was not a hard and repellent task. She did it cheerfully, even when it meant self-denial. She often sacrificed her own pleasure in order to do her work, but she never revealed any sign of disappointment. But her reward was great, for although she died so young, she won the love of the entire community in which she lived.

The funeral, which was probably the largest witnessed in the town since that of her father, took place on Monday, June 19th. The service was held in our own Church. A memorial service was conducted in the Church the following Sunday evening.

Ethel was born in the summer of 1883 at Otley, Yorkshire, to parents William Thoseby, a PM minister, and Isabella Lonsdale.