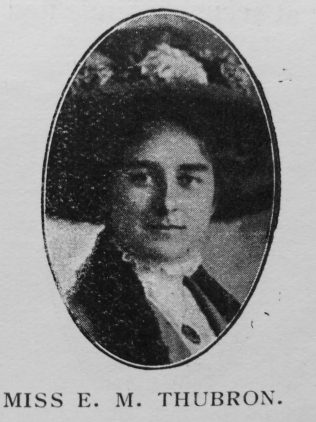 Transcription of obituary published in the Primitive Methodist Magazine by W. Johnson

Editor’s Note: This obituary contains language “of its time” that we would not find acceptable in the 21st Century.

Miss Elsie Mary Thubron, of Gateshead, the only and beloved daughter of Alderman and Mrs. Thubron, died suddenly on March 4th, 1911. Our dear young friend was fortunately the child of good home influences. The things which are true, which are honest, which are lovely and of good report, were set before her from the beginning, and her life was a development under their influences rather than a transition.

Hers was a maidenhood womanly in every sense, pure as a flower, rich in its love of the beautiful, and quietly tender and sacrificial in its sympathies. As our missionary reports show, she was from childhood a valuable yearly asset to our missionary society as a collector, and some of her warmest attachments centred in our missionaries, and in some of the African heathen whom our missions have transformed.

Miss Thubron’s beautiful and useful life, so strangely cut off, is to us a mystery and an unmeasured loss. But to Him whom we serve, and whose wisdom and love are unquestionable, things appear different, and until we see as He sees, we must be patient and wait, and as we awaken to His righteousness in life, we shall be satisfied.