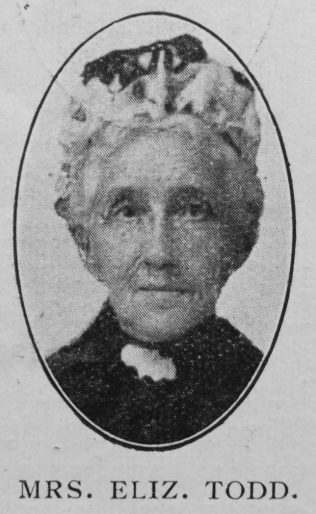 Transcription of obituary published in the Primitive Methodist Magazine by Jas. Shaw

Mrs. Elizabeth Todd’s maiden name was Robinson. She was born at Gainsborough, June 27th, 1827, and died May 29th, just before her 83rd birthday. At the age of twenty-two she became a member of Great Thornton Street Church, Hull, and for sixty years rendered valuable service in the Church. Her last public act was to open the annual bazaar.

For forty years she was an efficient class leader, and had special delight in all the means of grace. It was a great joy for her to see the family pew filled by her children. She loved to visit the sick and poor. From a girl, she read her Bible and other good books with care and profit. Having a wonderful memory she carried her precious gettings to the comfort of many a life in trouble and sorrow. Great Thornton Street Church was her home. Its peace and prosperity were her concern to the last.

By the death of Sister Todd, the last link of old Thornton Street Church with the days of William Clowes is broken. Her knowledge and the interesting facts she, with her husband, retained of the great evangelist were of a choice and rare character.

Elizabeth was born on 27 June 1827 at Gainsborough, Lincolnshire, to parents William, a baker, and Elizabeth. She was baptised on 28 June 1828 at Gainsborough.