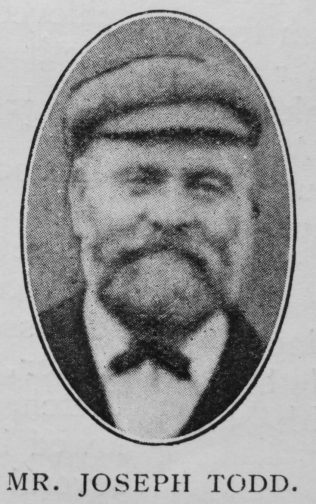 Transcription of obituary published in the Primitive Methodist Magazine by E.D.

Our Haydon Bridge Church has at the hand of death lost many of its valuable members of late, and on the 10th December last our good and kind friend, Joseph Todd, was called home to his final rest. What his death means is only being realised. Though never in the pulpit or on the platform, his life was devoted to the church, and in many ways, quietly, humbly, but faithfully, he served his God.

Mr. Todd was a great believer in the class meeting, for many years a Sunday School teacher, a good visitor of the sick, and always ready to do his part in the prayer meeting. His prayers were characteristic of the man—full hearted and sympathetic.

Alas! they are no more, and their absence can be felt. He encouraged young converts, and his words of cheer in what to some, after all, is only a cold world, will be greatly missed. Such men the church can ill afford to lose.

The interment took place amid every sign of sorrow, sympathy, and respect. The service was conducted by the Rev. M. Johnson, who gave a worthy tribute to his memory. The remains were followed to the graveside by a large number of friends, who, in spirit, bade a tender farewell to our beloved and esteemed brother. Wreaths were sent in such numbers that the grave was covered by a mass of beautiful flowers. There are left to mourn his loss a widow, three sons, and two daughters, all of whom are workers in the church. Though there may be the broken link here, we have the assurance that up yonder there is the chain that binds.