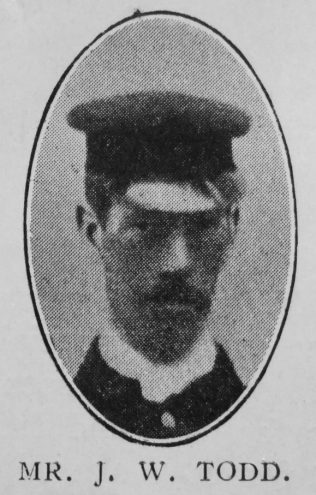 Transcription of obituary published in the Primitive Methodist Magazine by M.P.D.

Joseph William Todd was an employee on the North Eastern Railway, and in a collision on the line on February 19th he received injuries from which he succumbed two days afterwards. He was thirty-one years of age, and his tragic death plunged the Hexham Circuit in deepest gloom, for he was a local preacher of much promise, and had already gained a high place in the esteem of his brethren.

At Haydon Bridge, where his family had for three generation been honourably connected with the Church, his death was deeply deplored. He was one of the most useful officials of the Church, an active school worker, and being a young man of bright, cheerful disposition he had not only won the affections of his fellow members, but had become a general favourite with the travelling public.

Only ten weeks previously he had been married, and he and his bride had made for themselves a beautiful home in a cottage which he had purchased; and a social gathering had been arranged for the 28th for the purpose of presenting them with a wedding present. A sympathetic crowd, including many railway and circuit offcials, gathered for the funeral.

Joseph was born in the summer of 1880 at Haydon Bridge, Northumberland, to parents Joseph Todd, a railway signalman (1891), and Harriet Ridley.

He married Elizabeth Ormston in late 1911 in the Lanchester Registration District, Co. Durham.

Joseph died on 21 February 1912 at the Royal Victoria Infirmary, Newcastle upon Tyne, Northumberland.