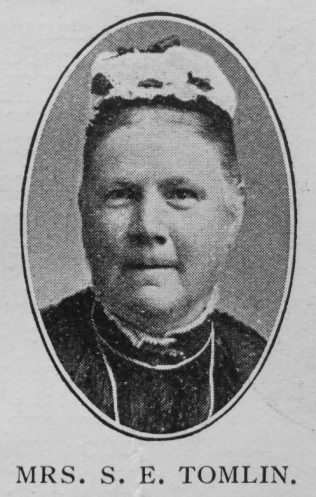 Sarah E. Tomlin, born in 1845 at Chilson, Witney Circuit, was the only daughter of the late George and Emily Hands, both loyal Primitive Methodists. They led our sister to God’s house in childhood, and under the ministry of Rev. G.E. Butt she found Jesus at the age of 12. She was a scholar, and afterwards a teacher, in the Sunday School, and became the wife of a devoted young local preacher, Richard Westbury. His removal from her side at Long Handborough in 1899 was the greatest trial our sister had ever known. In 1901 she became the wife of William Tomlin, another earnest Primitive Methodist of Lyford, Faringdon Circuit. In 1903 her second widowhood overtook her. She now returned to Long Handborough, in Oxford Circuit, the scene already of over 20 years of happy life.

She was warmly welcomed back by a small but loving society who knew her worth. Her Heavenly Father had graciously provided for her earthly needs, and it was one of her greatest joys to entertain the servants of God. In the Sunday School, public service, class meeting, prayer meeting, and by the bedside of the sick she was a power for God.

At her funeral, conducted by the writer, assisted by Bro. J.W. Woodcock, it was lovely to see her four brothers, all just past middle life, brave and strenuous workers for Christ. The source of these beautiful lives was a pious parentage. She was at the Tuesday evening service, June 14th, and afterwards testified to the friends how greatly she had been blessed thereby. The next night but one, as retiring to rest, the call of the Master came.

Sarah was born in 1845 at Chilson, Oxfordshire, to parents George, a labourer, and Emily. She was baptised on 5 February 1845 at Shorthampton, Oxfordshire.

She married William Tomlin (abt1838-1903) in the spring of 1901 in the Abingdon Registration District, Oxfordshire.