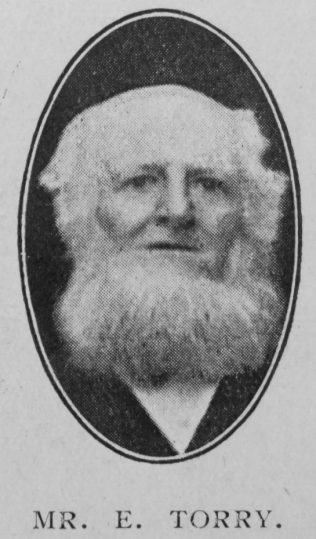 Transcription of obituary published in the Primitive Methodist Magazine by J.H.V.

Ebenezer Torry, son of Joseph and Sarah Torry, was born at Willoughton in the Scotter Circuit, in 1846. Brother Torry responded to Christ’s call when sixteen years of age, and for fifty years was a loyal follower of his Master. Settling in Waddingham, he obeyed the Holy Spirit’s impulse to preach the gospel, and for forty-five years continued in that work, which was to him an unspeakable joy.

For over forty years he led the praises of God in our Zion. For the same length of time he conducted a strong and healthy society class meeting. In the village he was  friend and counsellor of many. He was a stalwart Nonconformist and stout champion of our principles. He was one of those stalwarts through whom Primitive Methodism gains infinitely in a village.

After a well-spent life, on April 10th, 1912, the eternal rest became the toiler’s reward. To his daughter, the Waddingham Church, and Brigg Circuit, the memory of such a devoted Christian is blessedly comforting.

He married Mary Jane Richardson (abt1837-1904) in early 1872 in the Beverley Registration District, Yorkshire. Census returns identify two children and a step daughter, Annie, by a previous relationship.