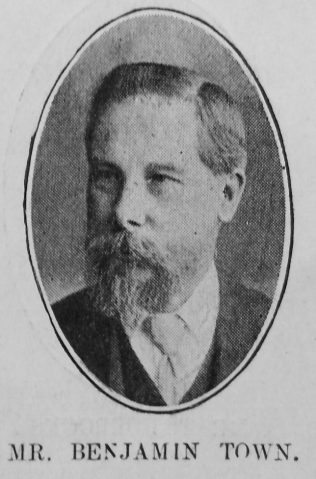 Transcription of Obituary published in the Primitive Methodist Magazine by T.D.

Mr. Benjamin Town, who died December 24th, 1908, was one of the best known and highly respected inhabitants of Guiseley.. Born at Rawdon, May 9th, 1835, in his early days he had to struggle with adversity, but, being possessed of an indomitable will, gradually rose to occupy positions of honour and responsibility. In February, 1860, he joined the church, and gave himself to it in the best sense, for he became a trustee, local preacher, class leader, Sunday School teacher and superintendent, and choirmaster. The respect in which he was held by his brethren led to his being elected delegate to the Manchester Conference. Being a great reader and thinker, he joined the Ministerial Association, in which he took deep interest, and whose meetings he attended when practicable.

For about thirty years he was in the employ of Messrs. Peate, of Nunroyd Mills, Guiseley, as foreign correspondent, clerk, and cashier; and, on retiring from that position, he was presented by the heads of the department in the mill with an illuminated address expressing their appreciation of the courteous — treatment he had at all times extended to them.

A staunch Liberal and a Temperance worker, a District Councillor, and a member of the Education Sub-Committee and a Secondary School Governor, he was a man of sound judgment and intelligence, and always ready to give of his best. When the Centenary Fund was inaugurated, he was one of the first to see its benefits and to promise a liberal subscription. Kind and courteous, he was a true Christian gentleman. His home was ever open to the ministers. He leaves a widow, one son, and three daughters to mourn his departure.

He was laid to rest in our graveyard at Guiseley on Thursday, December 24th. A most impressive service was held in the chapel, in which the following ministers took part—Revs. S. Stubbings, J. Harding, G. Ford, and T. Dowson. The Rev. G.W. King gave a very chaste and appropriate address. There was a large company present, including his former employers. May we meet beyond the shadow.