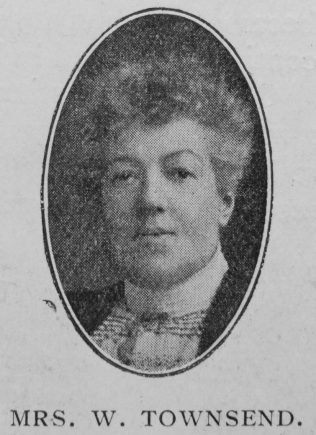 Hannah, the beloved wife of William Townsend, passed away to her eternal rest with tragic suddenness on Friday, August 16th last, as the result of a paralytic seizure. She was laid to rest in the Raunds Cemetery on the following Thursday, when the Rev. R. J. Fenwick, of Wellingborough, officiated. On September 1st Mr. Wycherley conducted a largely attended memorial service in the Hassett Street Church.

For forty years Mrs. Townsend was a consistent and devoted member of the Primitive Methodist Church. On the Devonport Circuit her name is still as ointment poured forth. Saved herself in her early teens, she-soon applied herself to the task of leading others to the fellowship of Jesus Christ. A communication from the officials of this Circuit to the bereaved husband testifies, “We remember with joy her saintly life . . . Her memory will always be precious to us. Many pilgrims on life’s way recall with thankfulness the stimulus of her inspiring words and the helpfulness of her consecrated  life.” In 1900 she married Mr. William Townsend and went to live at Raunds. On Mr. Townsend’s retirement in 1901, they came to live in Bedford and joined the Hassett Street Church, where they have continued ever since.

All who knew our late sister highly esteemed her Christian character and unquestioned devotion to the cause of Christ. As Sunday School teacher and Society class leader, she rendered splendid service. And when blindness fell upon her husband she courageously accompanied him to his appointments and conducted the earlier parts of the service for him. She has gone, mourned greatly by her bereft husband and his family, and by many friends.