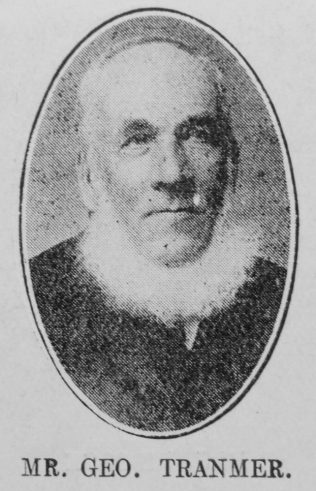 Transcription of Obituary published in the Primitive Methodist Magazine by F. Rudd

By the death of Mr. George Tranmer, of Cottingham, in the Hull Seventh Circuit, another link with the origin of the Connexion has been broken. Twenty years old when the Venerable William Clowes was called to his reward, our brother was born February 12th, 1831, twelve years after Mr. Clowes came to mission Hull.

It was not until six years after the departure of the apostle of Primitive Methodism that he fully surrendered himself to Christ. He then joined the Church and as Sunday School teacher and subsequently as class leader rendered great service.

Mrs. Tranmer shared with him an ever-deepening interest in the prosperity of the Church, hospitality being ungrudgingly offered to the preachers.

The chapel becoming too small for the Society Brother Tranmer with other trustees purchased a new site and erected a much larger sanctuary, schoolroom, and class rooms, and acted for many years as chapel steward. For twenty years he was an efficient member of the Cottingham School Board, and by his uprightness, spiritual fervour, and diligent attention to all his duties won the respect of all.

Representing his circuit at the District Synod he took the chair at the public meeting on the Monday evening. His eldest son is one of our most efficient ministers in the Leeds District; another son is society steward at Cottingham, and most of the large family are connected with the church.

Our brother’s interest in the cause lasted till the end, though for some years he was unable to take his wonted active share in the work. His last illness was brief and painful, but his confidence in his Redeemer was strong. Surrounded by most of his family he passed away February 2nd, 1909, within a few days of attaining seventy-eight years.

Revs. P.J. Fisher and W.J. Hemp conducted the funeral service, and the writer, who knew our departed brother forty-eight years, gave an address. A large company followed his remains to the cemetery, where his mortal body was laid to rest until the resurrection morn.

George worked as a waggoner (1851) and later as a pork butcher.