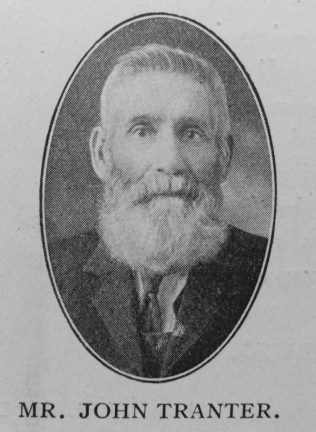 St. Helens Circuit has lost one of its brightest lights in the death of Mr. John Tranter. He was as fine a sample of genuine goodness as we ever hope to see. With no special natural endowments, except perhaps his inborn cheerfulness and fine optimism, his influence was remarkable. In the pulpit—for he was a local preacher fifty-five years,—in the prayer meeting, indeed, wherever he was, was an atmosphere that was spiritual.

He was one of the most companionable of men, and withal tender-hearted and  sympathetic and generous. Sympathetic with young life to an extraordinary extent, no more enthusiastic Christian Endeavourer could be found.

Born at Dawley Green, Salop, May 21st, 1832, of sturdy, warm-hearted Primitive Methodists, he was converted in his 23rd year, under the ministry of the late Rev. J. Langham. The late Rev. T. Guttery took great interest in him and taught him to read. In 1868 he removed to St. Helens, where, with a few years’ interval when he was located at Skelmersdale, he remained to the close of his life, Sept. 12th, 1910.

Note: A dataller was a worker hired or paid by the day, typically for manual work.