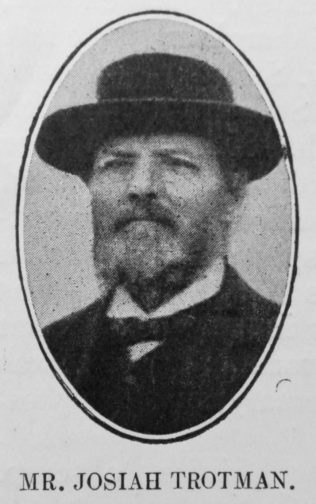 Transcription of Obituary published in the Primitive Methodist Magazine by E. Millichamp

Mr. Trotman was born at Shalton, a village in the Old Brinkworth Circuit. He was converted at the age of twelve, began preaching at fourteen and served our church for forty-eight years. While yet a youth, he removed to the hill county of Berks, and became associated with the Societies in what is now the Bradfield Circuit. Here he married Miss Alexander, of Stamford Dingley. They had two sons, who became members of our church and local preachers. They have successively resided at Bolton Farm, Basildon, and Queles Hall. In each home there was the family altar and daily worship, and the last-named place was the house of God and the gate through which our brother passed, on September 11th, into the eternal rest.

Mr. Trotman has for many years been the steward of his station; has represented it at the District Meeting, and went one year as a delegate to the Conference. He was a successful man of business and made for himself and family a good social position. He became a Parish and District Councillor and a guardian of the poor. He rendered service to his circuit in helping to build the manse at Bradfield, and he with the writer were the first passive resisters in the county.

It is as a preacher, however, he will be remembered the longest, his strong mind, commanding personality and effective speech always made a deep impression and helped the weaker souls into a stronger and braver life.

The last days of our brother’s career were clouded and troubled. He was seized with a cruel, painful and fatal malady, and for twelve or more months he walked through the valley and shadow of death. He had times of deep depression, but realising the truth of the Gospel he had preached, and attended by his devoted wife, he was on the whole wonderfully bright and singularly free from doubts and fears. When visited by the writer, Mr. Harding, his co-steward, and the superintendent of the circuit he gave proof of his faith and hope. His end was peaceful.

The funeral took place at Bradfield, September 15th, conducted by the Rev. A. Clarke. The writer gave an address and offered the dedicatory prayer of the new cemetery, at the back of the chapel in which our brother was the first to be buried. There was a very large attendance.