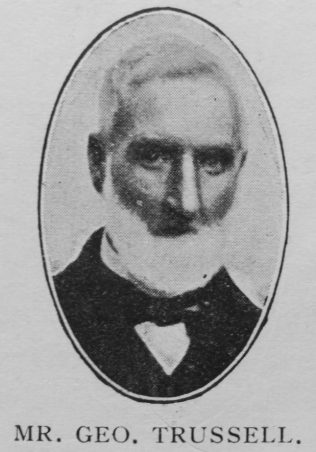 Transcription of obituary published in the Primitive Methodist Magazine by John W. Gregory

George Trussell for nearly 60 years was one of the most honoured and respected members of our Ashby-de-la-Zouch Church. When quite a young man he was led to a class meeting, and there in response to the Leader’s exhortation, he said, “This people shall be my people, and their God shall be my God,” and from that time to the end of a long life, he was a most useful and exemplary worker in our Church.

For 50 years he held the position of Sunday School Superintendent, and treasured the  diploma he received for this work; for a similar number of years he discharged with wise and devoted attention the difficult duty of Society Steward. He lived to worship in three chapels, and to each he and his family contributed with great liberality.

As a man he had the respect and confidence of all who knew him; a man of reflection and reading, a real sermon taster, an attentive hearer, an inspiration to many a preacher, a most devout and reverent worshipper, a lover of good singing, a true and saintly soul.

He was beloved by his family, every member of which is a loyal supporter of our church.

He shed a fragrant influence, his quiet unobtrusive faithfulness was an evangel.

He passed to his reward on February 26th, 1909; an impressive funeral service was conducted by Rev. G.T. Fawcett amidst many tokens of sorrow and esteem.