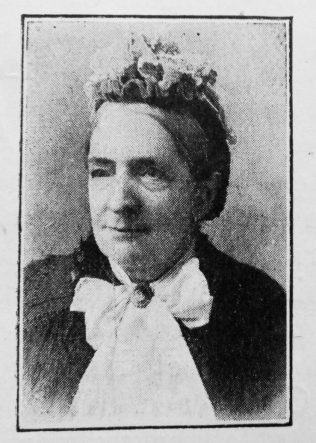 Transcription of Obituary in the Primitive Methodist Magazine by G.D.T. Pidsley

Mrs. Thomas Tunna, of Oswestry, exchanged mortality for life, August 19th, 1906. For over fifty years she was associated with our church and was among the oldest of our members. She with her husband and family have been as pillars in the church, and their loyalty and devotion have done much to develop our cause until it occupies a foremost position among the Free Churches of the town. Into the bazaar for the erection of the beautiful new schools in Castle Street, she threw all her energies and raised a handsome sum. When the new church was erected she gladly consented to lay one of the memorial stones, and the event seemed the crowning joy of her life. Of few words she was yet mighty in deeds. She greatly enjoyed the means of grace, and often in a good service her face was radiant with delight. Her consistent life, her kindness and gentleness, were a source of inspiration to the preachers and to her family.

Diligent in business she was also fervent in spirit, serving the Lord. Her influence in the home life was especially marked. Her four sons and two daughters are honoured and exemplary Christians and members of their mother’s church. On the occasion of the Golden Wedding of our sister and her husband the Church presented them with an Illuminated Address, as a token of esteem and expressive of congratulations and good wishes.

It was evident for some time that her health was failing, but human skill and care were in vain. She suffered much but bore it with exemplary patience. She bade her weeping family not to weep, as she was going home where there would be no more pain. Her remains were laid to rest in the presence of a large and sympathetic company, the Revs. D. Oakley, J. Clare, W. Perry, and G. D. T. Pidsley taking part in the service. Her favourite hymns, “Rock of Ages,” and “Jesus, lover of my soul,” were sung. An impressive Memorial Service was conducted the following Sunday, by Rev. D. Oakley. Our dear sister is not lost but gone before.

Sarah was born in 1834 at Treflach, Shropshire, to parents Richard Rogers, a farmer of 30 acres (1851), and Elizabeth. She was baptised on 30 November 1834 at Trefonen, Shropshire.