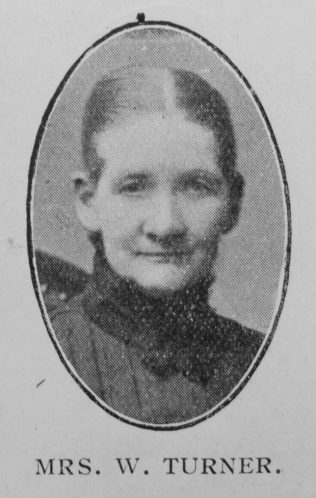 Transcription of obituary published in the Primitive Methodist Magazine by E.E.F.

The subject of this sketch was a lifelong and loyal Primitive Methodist, and was connected both by ancestry and marriage with our Connexion in its early days.

Born on February 19th, 1844, she was the daughter of Joseph and Mary Coling, of Woodcote. Mrs. Turner’s father was a much respected Local preacher of the Reading Circuit, and her mother at one time had lived in the family of John Rider. Under these pious influences our late friend developed a strong and tender Christian character.

In January, 1877, she married Mr. W. Turner, a son of the late Rev. Samuel Turner, a former minister of the Reading Circuit. Their union proved a happy one, and they both lived to see their family of three daughters become active members of our Church. In 1891 Mr. and Mrs. Turner joined our Friar Street Church, Reading, and somewhat later Mrs. Turner became a Class Leader, which position she held, with increasing effectiveness, until a short time before her death. In this position she gathered around her a band of young people who became closely attached to her, as they were led to realise the tenderness and sincerity and courage of her nature.

The last few years of the life of our departed friend were somewhat clouded by domestic affliction. For several years prior to his death her husband was confined to his bed by sickness, during which time his wife proved to be a most tender and loyal nurse. After his death, in the beginning of this year, Mrs. Turner’s health gradually failed her, and on October 1st, 1911, in the presence of all her children, she passed to the spirit world. Her loss will be keenly felt by all who knew her.

The funeral of our friend took place on the Thursday following her death. The first part of the service was held in our Friar Street Church and was conducted by the Revs. E.E. Fisher and W. Raistrick and Mr. H. Ralph, the interment afterwards taking place in the Reading Cemetery. An “In Memoriam” service was held in our Friar Street Church on Sunday evening, October 22nd, and was conducted by the Rev. E.E. Fisher. A large number of friends were present to show a last token of respect to one who was held in high esteem by all who had the honour of knowing her.