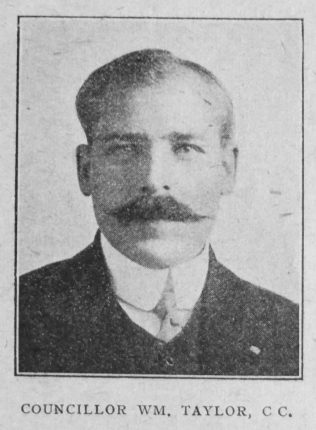 Transcription of Sketch In the Christian Messenger by Rev. Mathew Dobinson

COUNCILLOR WILLIAM TAYLOR is a native of Derbyshire, and has all the ruggedness, tenacity and daring of the county. He has schooled himself for the venture, and his sheer determination has gained the object of his aim. He has put in a worthy devotion and he has been rewarded with a great distinction.

He had no advantages to commend the pace or to gain his ground; it was otherwise. His unenviable start was still more hampered that he did not address himself to the seriousness of life till his teens were well advanced. He did not join the church till manhood had dawned. This was in 1904. But since he has made rapid progress. He is ever willing to pay his tribute to the Rev. T.B. Caukwell, minister of the church at the time. He at once became the secretary of the Young Men’s class at Wood Street, and within a few months was requested to prepare for the plan as a local preacher. Thus he began his public career.

The experience of conversion placed life in true perspective. An intimacy with the Divine gave him a perfect fellowship with the human. He found the incentives to the duties to his fellow men by his devotion to God. This relationship has never been broken. Trade Union principles claimed his attention, He became an active member of the local lodge of the miners, of over a thousand members, and the first year of his membership he was appointed the auditor; the next year he was elected on the committee; and for twelve consecutive years he has been voted a member. For five years he was president, and has been for two years district chairman over a body of workmen numbering six thousand. He has sat on the board of the Derbyshire Miners’ Association Executive, where he has done some very important work on behalf of his fellow workmen.

He regretted the war, as all men regretted it; but he considered its world meaning inbroad judgments, and looked through “wisdom’s eyes,” and felt a past as well as saw a future. This all kindled his enthusiasm. He associated himself with the most active spirits of the locality. He sat on the Colliery Court Tribunal, the local Food Control Committee and the South Derbyshire Distribution of Food Committee; was a member of the Joint Committee of the Labour Exchange and War Pension and Juvenile Employment Committee, and also a member of the Court of Referees. He displayed great interest in the war relief work generally, and at present is chairman of the Butterley Coal and Iron Company’s War Relief Fund, to which the owners and workpeople have contributed over £52,000. He still retains an active interest in the S. & S. Families Association and Red Cross Society and the U.S.F. and the Derbyshire County War Relief Committee, to all of which he has given unstinted devotion. For such vast services he has won unstinted admiration, and on more than one occasion has received special thanks from the committees.

Councillor Taylor’s work is of still wider dimensions. In 1919 he was elected a member of the Derbyshire County Council. He had a severe contest; had confronting him a strong candidate, but won with a majority of 288. Here he has done a great work, serving on many sub-committes. He has taken a deep interest in the County Asylum administration. The pathetic condition of the inmates made a strong appeal to his sympathies and interest. Agriculture, Small Holdings, Old Age Pensions, National Insurance, etc. have received from him a close attention. He is an Urban District Councillor, a School Manager and a Governor of the Ripley Cottage Hospital. He was a loyal supporter of the co-operative movement. And all this is accomplished while he follows his employment as a working miner. The outline is its own comment. He finds time for all this, and yet, with hands so full and time so occupied, he has always time and disposition for service to any man who solicits his help, and many are the people who have occasion to feel a great indebtedness to him for service rendered on their behalf.

The subject of these few notes has solved the problem of fulness of service by his attention to first things first. He has first equipped his manhood, and all other comes as the incident. He is a staunch total abstainer. He is at present secretary of the Onward Tent of Rechabites. He has filled the positions of O.S.J.T. and P.D.G.R. He has represented the North Midland District of the Rechabites at Ayr and Bradford Conferences, and at Manchester, Swindon, Northampton and Leicester Provincial Councils.

All that Councillor Taylor has done has been by his steadfastness to our church. It was the power of God that turned his feet; it is the same power that has made his feet keep the path. He is a local preacher, as might be expected. He has a style all his own. He has a broad gospel to present, and pays due regard to the fundamentals of the faith. The Sunday school has had special attention, and when at home he faithfully finds his way to his class. This is a work in which he delights. He has ever been a great educationalist, and does not fail to apply his ideals to the youth of the church. For the past fourteen years he has taken part in preparing the scholars for the Connexional Scripture Examinations. District prizes have frequently been won by the scholars so trained, and this year he, with others, have had the delight of training the class of young people that were successful in winning the Charles Hilton Shield for the Nottingham District.

The C.E. has had his services as president for a considerable time, and he has given his aid to the Band of Hope of his church, and takes his place in the Young Men’s Institute. For some years he acted as assistant secretary of the Trust, and now fills the position of secretary. It was largely through his inspiration and organisation that the church a few months ago determined to clear the last of the debt from the property. And it was accomplished. He is a member of the District Committee, and has twice represented the Circuit at the District Meeting.

He has more than felt the pulse of this new age; he obeys the urge that lies behind it. He is accustomed to interpret it as a manifestation of the Spirit of God. The world of affairs was getting into ruts, and the church was not free from the tenacious grip of habit and the evils of a consolidated life that had limited experience and modified its enterprise. The problems of the moment are formidable but not unsolvable. There is nothing that lies beyond the power of the Cross. By its spirit the World must climb unto the highway of the Lord, for only on that way lies the way of salvation. Councillor Taylor mistakes not, and is not blinded by the glamour of the perfect organisation and all that it claims to do. He has the knowledge that it is first and last a change of heart, and he ever has that vision in view. He has gone far in a few years, and his life is yet young. He is well sustained in a good wife and devoted son, whose constant aim is to help him in his many projects that seek the well-being of his fellows.

William was born in 1878 at South Normanton, Derbyshire, to parents William and Sarah Ann. William senior was a coal miner.

William married Emma Godfrey (1881-1962) in the summer of 1902 at Ripley, Derbyshire. Census returns identify one child.

William’s death was registered in the first quarter of 1931 in the Belper Registration District, Derbyshire.