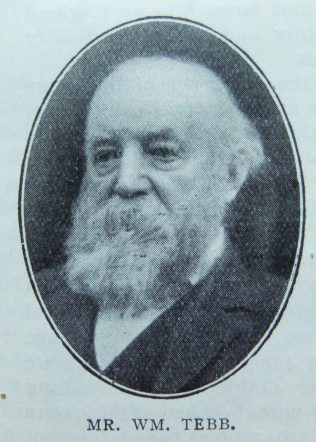 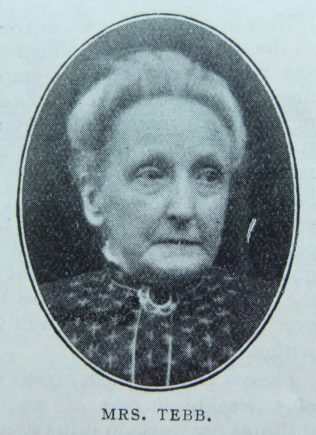 Transcription of ‘Sketch’ In the Christian Messenger by J.H. Robertshaw

William Tebb has been a Primitive Methodist for more than half a century, and just recently he and his good wife have celebrated their golden wedding amid the congratulations of numerous friends. To know our brother and converse with him is not only a pleasure but an education. He is the type of man who makes one long to rise to a higher platform of religious life, and conversation with him leaves the impression that he spends much time in the presence-chamber of the King.

He was born into a godly home at Laverton, near Ripon, in the year 1834. His parents were Wesleyan Methodists whose house was used for preaching services for twenty-seven years prior to the building of a chapel. Squire Brook and Thomas Seymour were among the preachers who conducted services in the cottage, and in one of these services William, while yet a lad, yielded himself to Christ. He well remembers the hungry forties when flour was four shillings and sixpence per stone, and his father but a poor farm labourer earning twelve shillings a week, on which he had to bring up a family of six children. When it was their day to take the preacher, his mother would often make a meat and potato pie, though in the pie was little enough meat. What there was she placed on one side of the dish and made a certain mark on the crust so that she might identify it as the portion intended for the preacher. Amid such humble surroundings our brother spent his early days. On leaving school he was apprenticed to the work of gardening, an employment which he followed to the time of his retirement. His work took him to different parts of the country, and the year 1860 found him in the employment of his cousin at Harrogate. Here it was that he joined the Primitive Methodist Church and was soon actively engaged among the children. The Sunday school was opened in 1861 and in the foundation of this our brother took a prominent part. At the first session there were three scholars present, but these were soon increased through the energetic labours of our brother, who went about the neighbourhood inviting parents to send their children to the Sunday school. At Harrogate he married Elizabeth Parnell, who was a teacher in the same Sunday school. On removing to “Healey House,” near Huddersfield, he was presented with a silver watch in recognition of his valuable services.

On the first Sunday morning after his arrival in the West Riding he set out to search for a Primitive Methodist chapel. His search led him to the village of Honley, three miles away, and being a stranger, he inquired of a youth he met as to where the Primitive Methodist chapel was situated. The young man replied that “he knew of noa place in Honley o’ that name. There’s a lot called ‘hard-backs’ (Congregationalists) just up there, if them’s who yo’re seeking.” “The people I’m seeking,” said William, “are generally called “Ranters.” “Oh, onybody knows where the ranters’ chapel is,”  answered the young fellow, “but if yo’re going there thinking o’ getting owt yo’ll be taaen in, for they’re too poor.” The way was then pointed out, and our friend made his way to the church. Such was the introduction of William Tebb to Primitive Methodism at Honley in the Scholes Circuit.

For thirty-seven years our friend has been connected with this church, and during that period has rendered yeoman service, both as Society steward, school worker, and member of Mission band. His wife has always stood by him in this labour of love, and as Class leader and Sunday school teacher has greatly helped the spiritual life of the Church.

William Tebb has never been a believer in half-time service. For many years he and his family left their home each Sunday morning, taking food with them for the day, which they partook of in one of the school vestries. At every service of the Sabbath they were present, and in this respect set a fine example to others.

Through failing health our old friend is no longer able to get to the services or follow his employment. Along with his wife and one daughter he lives in a cottage situated on the top of a hill, and near the place of his former labours. Both he and his wife enjoy the benefit of the old age pension, and in their eventide are realising a ripe Christian experience.

William was born in 1834 to parents John and Ann. John worked the land.