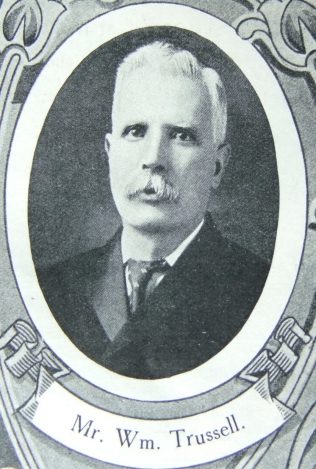 Mr. William Trussell hails from Ashby-de-la-Zouch. He is a life-long Primitive Methodist, his father having been associated with our church in this quaint old town for many years. He was converted through the instrumentality of Rev. I.J. Hardy and very soon afterwards became an active worker in the Sunday School. He was a born financier. The Ashby officials discovered this and appointed him secretary of their Trust and treasurer of the Sunday School. In a short time he completely reorganised the finances of these interests and placed them on a sound basis. Mr. Trussell is highly esteemed in Burton-on-Trent. He had been in the town only about twelve months when the First Circuit elected him to be Steward. For some years now he has carried out the duties of this office with great ability and general acceptance. He is kind but firm, cautious and yet enterprising. He is the mainstay of our Centenary Church on Belvedere Road, has represented the Circuit at the District meeting, and attended Conference. He has been President of the Burton C.E. Union.

William was born abt 1863 at Ashby-de-la-Zouch, Leicestershire, to parents George and Elizabeth. George was a leather draper.

William worked as a railway clerk.

William died on 5 May 1929 at Burton-on-Trent, Staffordshire.