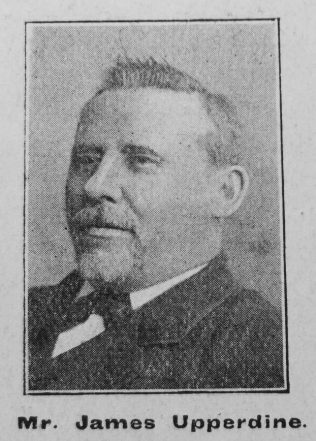 Transcription of Obituary in the Primitive Methodist Magazine by D.

James Upperdine was born at Bilston, Staffordshire, in the year 1837. At a very early age he was sent to work in the pit, receiving as wages sixpence per day. During the he winter he seldom saw daylight except on a Sunday, and in many other respects had to “endure hardness.” As a youth he was not brought under religious influences, hence he grew up to manhood without any regard for the higher things. Shortly after his marriage he was induced to attend special services which were being conducted by Richard Weaver, and was led to make a full surrender of his life to the service of Christ. Not being able to read, he made up his mind to attend the Sunday school, taking his place in a class of small boys. In later years he often spoke of this as a peculiarly trying experience, and said that he had to strive against temptation with all his might in order to hold on his way.

But he bravely persevered, and before long could read fairly well. He soon became useful in the Church, was most regular in attendance at the means of grace, and was greatly interested in prayer meetings and cottage services. It was clear from the first that he was bent upon doing all he could for the Master, and it was a great joy to him when he was proposed as a candidate for the plan. As a preacher he was well received everywhere, and was exceptionally successful as a soul-winner. In the course of a few years he removed to Woolley, near Barnsley, where he did much towards raising a Society, and where “he helped to make the history of days which are still remembered by some of our older members with great delight. He ultimately settled at Staincross in the same circuit, at a time when our Church was in a very feeble condition, numerically, financially, and spiritually.

From that day to the day of his death he set his heart upon that church with a result such as is given to but few to realise. For many years the was a most earnest plodder in connection with the old building, and his efforts during the progress of our new building scheme were truly heroic. If ever a man was under the spell of one object so as to be completely lost in it, that man was our departed brother, and that object the erection of the church which will always stand as a monument of his remarkable enthusiasm and courageous faith.

The opening services were scarcely over when the Lord took him. He was enjoying a well-earned rest with his dear wife at Scarbro’, and was apparently better in health than he had been for several months, when he was seized on the morning of October 8th, 1903, with an attack of heart failure, and in a few moments “he was not,” for he had passed into the heavenly places.

He was a real leader in our Church, and it is impossible to say how much he will be missed. He had greatly won the respect of his neighbours, and of all his brethren in the circuit, as was evidenced by the very large number attending his funeral on an exceptionally wet day. He was a very familiar figure at our circuit gatherings; was seldom absent from the Quarterly Meeting, in which he always took a leading part; and was also deeply interested in the business of the district, having been a member of the District Committee many years.

He was taken just at the time when it seems to us that he was more needed than ever. But we are thankful that in the good providence of God he was permitted to see the completion of the project into which he had thrown so much of his energy, and to which he had looked forward with such exultant hope. He was often heard to say during the few weeks preceding his death: “Now lettest Thou Thy servant depart in peace . . . . for mine eyes have seen Thy salvation.” Wherever he was known, the tidings of his death were received in such a manner that his family may well be proud of the esteem in which he was held by people of all classes in all parts of the district.

The trustees at Staincross have decided to place a tablet in the new church in recognition of his faithful service and generous support, and as a mark of their own personal regard.

To her who was in many ways at true helpmeet, and to the children he has left, the loss is irreparable. In a home that was unusually bright and happy, the bereaved ones sit in the shadow. The Lord comfort them and give them strength.