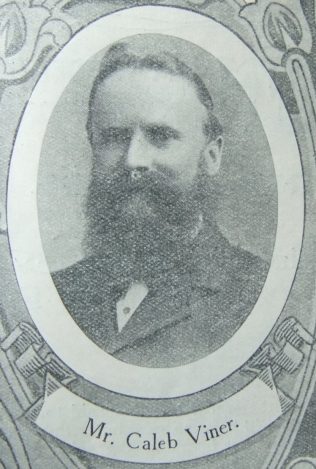 Mr. Caleb Viner, of Witney, has been a member of our Church 45 years, and Circuit Steward 25 years. He is co-Superintendent of the Sunday School, Vice-President of C.E., and a local preacher. His geniality, liberality, and loyalty to primitive Methodism have secured him a strong place in the Brinkworth District, which he has twice represented at Conference, and also at Birmingham and Oldham Triennial Assemblies. Mr. Viner began life in humble circumstances, but by energy, economy, push and stickatitness has won large success in business. For several years he rendered good service to District Funds, and is now its “Centenary Fund Treasurer.” As a total abstainer and non-smoker he sets a safe example. In every good work he has the cordial co-operation of his wife – their sons and daughters are Primitive Methodists, and will we trust, render service to our Church in days to come.

Caleb was born in 1849 at Witney, Oxfordshire, to parents Caleb and Maria. Caleb, senior, worked the land.

Caleb developed a grocery and drapery business in Witney.

Caleb married Temperance Lloyd (abt1849-1933) in the summer of 1870 at Witney, Oxfordshire. Census returns identify nine of ten children.