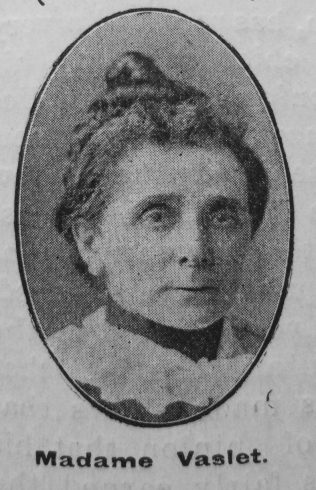 Transcription of Obituary in the Primitive Methodist Magazine by I. Dorricott

Another earnest, worker has passed from the vineyard of Christ to the reward and rest of eternal life, one who by family connection linked us with the remoter past of Primitive Methodism. Those links one by one are being severed, and the Connexional life is taking to itself new methods of development and adjustment in regard to the newer and larger needs. Madame Vaslet, youngest daughter of the late Rev. Thomas Russell, was born at St. Austell during her father’s appointment there. Her earlier education, through the then frequent changes of locality and other causes, was subject to serious checks. It was nevertheless liberal and thorough, and was finished at a private school in St. Albans, in 1868.

She became an ardent and devoted worker, especially in the Sunday School and Band of Hope. Mr. Russell was appointed to Dover in 1872, and immediately began the work of evangelism and extension, for which his life was so noteworthy. The clamant needs of Dover, where our cause in Peter Street was then but feeble, aroused him, and he almost immediately opened a new mission in the pier district, which resulted in the erection of a chapel. His daughter and devoted wife, as indefatigable as himself, joined in the holy crusade. Miss Russell at once commenced a Sunday school and Band of Hope, which were continued until the chapel was sold for railway extension. A new mission was also commenced at Haxton, Dover, by the Russell family. Here again Miss Russell began a Sunday school and Band of Hope, in a room built by her father, in 1874. This work has resulted in untold good to the district, and it is now enlarging and full of gracious promises and almost unlimited extension.

She was married to M. Emile Vaslet, a professor of languages, in 1881. The step was a serious one, as their religious trainings had been so widely different, and it gave some anxiety to her friends as to whether the harmony and peace such a union should bring would be realised. But it is pleasant to state that the understanding reached was honourably maintained by both, and one of her latest assurances was that her religious life and work were never interfered with, and that M. Vaslet was the kindest of hnsbands. Her illness, of three years’ duration, was begun by an operation. A gradual decline supervened, associated with a severe kind of muscular rheumatism. Being unable to take solid and nourishing food for a long period, the wasting process continued till the end came. She suffered much, but was very patient, and until within a few days of her death, had a strong desire to recover and be again at her loved work. Often in extreme weakness she went into the school room to her day-school pupils, and frequently sent loving messages to the Band of Hope and Sunday school children. During these days, full of pain and feebleness, she lived in the light of God’s smile, and when a little while before her death the writer gave her the sacrament, she revealed a gracious ripeness for life eternal. Her end was a time of holy peace. Not long before it came she said, “Good night everyone! God bless everyone!” and those, her last words, live in the memories of her children, an ever fresh benediction. She has left behind a husband, son and daughter, who keenly feel their great loss. The daughter, Adele, is a highly esteemed member of our Church and a devoted worker in the same cause as her mother. Mrs. Russell, the ardent and cultured co-worker of Madame Vaslet, still lives at Maxton, truly loved by all who know her. She displays an evergrowing affection and generosity for our advancing work at Maxton, and in Dover generally. The funeral of Madame Vaslet, conducted by her nephew, the Rev. Thos. J. Gladwin, was a pathetic scene, especially among the children. One of them, by her own request, sang on the occasion a special hymn from “Sacred songs and solos,” beginning:-
“’Twill not be long our journey here:
Each broken sigh and falling tear,
Will soon be gone, and all will be
A cloudless sky, a waveless sea.”

Charlotte was born on 20 December 1845, not 1847 as stated in the obituary, at St Austell, Cornwall, to parents Thomas Russell and Elizabeth Ann Duke.

Before her marriage Charlotte was a schoolmistress.

She married Emile Joseph Vaslet (abt1851-1924) in late 1881 at Dover, Kent. Emile was born in Belgium and worked as a professor of languages. Census returns identify two children.