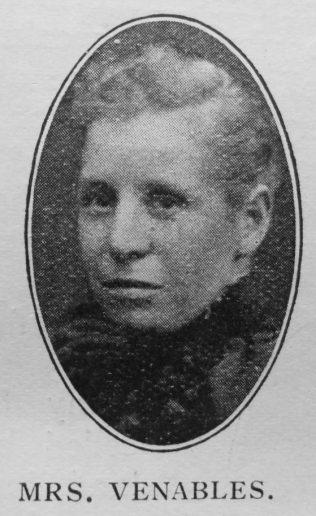 Transcription of obituary published in the Primitive Methodist Magazine by T.H.C.

On April 17th Clara A. Venables, the wife of Rev. J. Wardman Venables, of Norwich 1st Circuit, heard her Father’s call to rest. She was cradled in our Church. Her father, Mr. Clare, was for many years the Steward of Walkden Circuit. Sixteen years ago she left her home to share her husband’s ministry on the Whitchurch (Salop) Circuit, then for ten years at Wisbech, and for the last four years at Norwich. Her religious life was not demonstrative but deep. She ministered to her Master by sacrificial deeds. Her love for her church was intense and abiding. Characteristically she desired, if any hymn were sung at her funeral, it should be

I love Thy kingdom Lord,
The house of Thine abode.

After nursing her father through his last illness she was looking forward to the removal to Oldham in July that she might be near her aged mother. But stricken down with paralysis, and weakened by heart trouble; after a month’s illness she passed away at the age of 45.

The affection and respect she had won from those who knew her, and the sympathy felt with her husband and children was shown in some measure by the numbers who came to pay the last tribute of respect to the earthen vessel which had held so fair a soul. Representatives from all the places on the Circuit were present, from many of the Circuits in the district, and nearly all the Free Churches in the city. The funeral service was held in Queen’s Road Chapel, and was conducted by the Rev. G. Forster (Forstner), assisted by the Revs. A.T. Wardle, F.C. France, and W.S. Barrett. The Rev. A.W. Edwards, an old friend, spoke of her Christian character and service.

Her cares and toils were given to her church.

Now the Lord of the Church has said Well done.

Clara was born in the summer of 1864 at Kearsley, nr. Bolton, Lancashire, to parents William Clare, a commercial clerk at chemical works (1861), and Mary Ann Hardman.

She married J Wardman Venables, a PM minister, in the summer of 1894 at Wrexham, Denbighshire. Census returns identify four children.