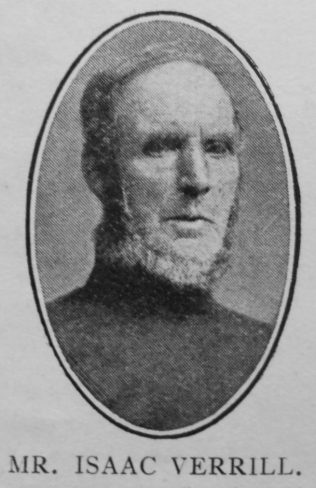 “Qld Singing Isaac is dead,” was the news that awoke the sympathy and sorrow of every inhabitant of the village of Staithes, on November 21st, 1909. Isaac Verrill was almost the last of the group who joined our Church some 50 years ago, and gave their powers and service to the Church. Few communities can boast of a finer race of men. Isaac Verrill was a class leader 21 years, but he will be remembered most for his work in the choir. For the almost unprecedented period of 40 years he held the post of singing leader.

The funds of the Church and circuit were enriched by the efforts of Isaac and his choir. The great event of the year was the Christmas Carol singing. One of the company carried the money box, a miniature ship fully rigged. At hall and cottage they generously contributed to the ship’s cargo of silver and gold.

One characteristic service he rendered the village was his constant attendance at all funerals. He sang at the home of the bereaved and at the grave of the departed.

His end was peace. No man could wish to have a more glorious sunset. He had sung all his life, and in the eternal fitness of things, he sang in death. Raising his left hand to his ear, a habit peculiar to him, he sang in a feeble voice:’‘Hallelujah, Hallelujah.” With this note of victory he passed into the presence of his Lord.

The people’s tribute to his memory and the Church’s recognition of his labours were seen on the day of his burial. The whole village turned out, and representatives from all over the circuit came to pay their homage to this departed servant of God.

Mr. J.T. Bennington and the Rev. J.T. Wilkins (Congregational) conducted an impressive service in our church at Staithes amid many signs of profound grief and sorrow.

Isaac was born in late 1840 at Staithes, Yorkshire, to parents Burton, a fisherman, and Hannah.

Isaac earned his living as a fisherman.