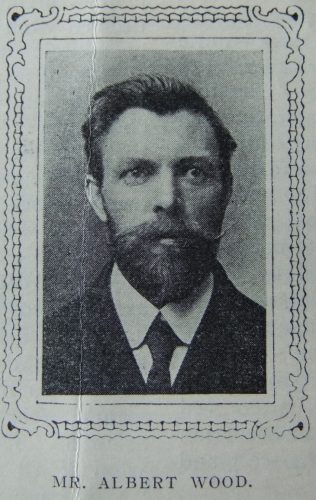 To be joint leader, along with the minister, of an important town Society-class is no sinecure. Nor does the subject of this brief sketch – Mr. Albert Wood – treat it as one. A man of such noble ideals as his could not. We have seen few men of loftier ideals, or with a closer attachment to them. He is a native of Bourne-heath, in our Bromsgrove Circuit, and was born in 1873. So it will be seen that our friend knows nothing as yet of life‘s yellow-leaf period. Rather is he in the glorious noon. Not on the ground of his being a veteran, but on account of the splendid quality of his labours, is he worthy of note.

He has never been out of our church. He knew close fellowship with God at sixteen; and let it be said that his early enthusiasm shows no sign of waning; the love then begotten has lost none of its warm, fresh vigour. Life he regards as a communion; service for God a sacrament. Naturally, he well emphasises the importance of the Class-meeting to our Church. He is as faithful a class-member as he is a class-leader. Rejoicing to be led in the devotions of the hour equally with leading others, in refreshing, renewing worship. He is as good a school-worker as he is a class-leader, and has been in school offices during the whole of his Christian career. He is as good in the pulpit as in either of the offices just named. He has been a local preacher since 1890. In each he plays distinctly a manly part. He has stood by our cause at Lee Lane (Horwich Circuit) since its inception; nursing, tending, serving it in all phases of its development. Now, when it gives every promise of marked success, his joy is the joy of him who doth not serve God for nought.

Albert was baptised on 10 November 1873 at Catshill, Worcestershire. His parents were Noah, a nailer, and Ellen.

Albert began work as a railway labourer and then became a railway engine fireman.