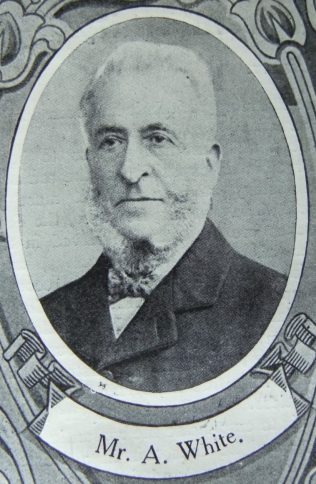 Mr. A White, the subject of this sketch, has been Circuit Steward of Frome Circuit for many years, and in this capacity has rendered loyal and distinguished service. He is a generous supporter of the Church in all its activities, a loyal Primitive Methodist, and an ardent lover of his Church, and is always willing to give of his best to further its success.

At times he has held almost every office – and to whatever department of toil he has devoted himself he has spared no pains to carry it to a successful issue. Mr. White has a son whose splendid musical talent is devoted to the interests of our Church at Frome, also a daughter who is the wife of one of our ministers.

His home has always been open to the preachers, who receive a hearty welcome. We trust he may be spared to render many years more of service.

Alfred was born in 1843 at Corsley, Wiltshire to parents Joseph and Emily. Joseph was a grocer and baker.

Census returns give the following occupations for Alfred.

As well as serving as circuit steward, Alfred was organist at Frome, until succeeded by his son, and  trust treasurer.