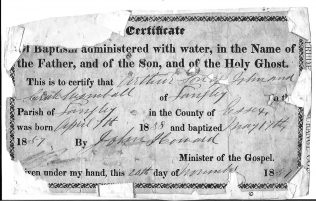 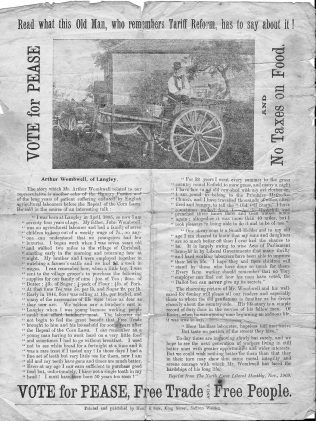 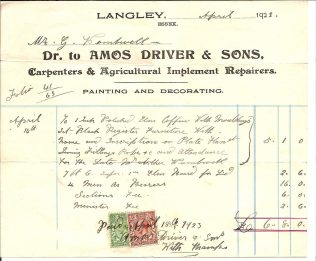 Arthur Wombwell, my Great-grandfather, was the son of John Wombwell and Sarah (nee Corby) and he was born in the village of Langley in North-West Essex in 1838 and grew up with his siblings Charles, William, Honor, Ann, John and David, and began work as an Agricultural Labourer at the age of seven.

Primitive Methodism came to the area from the Upwell Circuit which, at their Quarterly Meeting in March 1838, decided to send out two Missionaries. Bentley Redhead and John Jackson were selected. They could not decide where to send them, but in April they set out, (and one account said “At a venture”) and walked the forty miles to Saffron Walden where on the 2nd of May Mr Redhead preached in Castle Street. The mission expanded and spread through the surrounding villages eventually taking in the village of Langley.

Baptized at the age of 19

Arthur Wombwell was converted and baptized and the Certificate of Baptism certifies that ‘Arthur son of John and Sarah Wombwell of Langley in the Parish of Langley in the County of Essex was born April 7th 1838 and baptized May 17th 1857 by John Howard, Minister of the Gospel. Given under my hand, this 20th day of November 1857’.

This would make Arthur 19 when he was baptized and he soon became more involved.  When the Primitive Methodist Chapel at Langley was built and opened in 1862 he was one of the Trustees for the new building.

The Langley Account Book reveals that Arthur and the whole family, including his father John, helped raise funds for the building and to support the work that followed.

In 1862 Arthur married Hannah Cranwell and they had two children, Eliza and Alfred Frederick.  When Hannah died he married Sarah Ruth Coulton in 1874 and their children were Edith Emily, Florence Eliza, Ether George, and Kate Uralia, Frank Henry, and Monica. It was via Ether George that the link to me was made.

On the PM Preaching Plan of 1859 there are listed under Prayer Leaders. “Wombwell and Wombwell” (I think Arthur and David) to lead services at Manuden, Duddenhoe End, Anstey, Furneaux Pelham, Brent Pelham, and Melbourne. In addition there was a mid week at Langley.  In the 1894 Plans David is listed as “On Trial”.

Arthur is listed as a Local Preacher on the January to March 1905 plan as taking services at Clavering and Langley (both doubles).

Arthur was an agricultural labourer, but I understand, at some point he broke his hip, which limited what he could do and therefore he sought to earn some money selling sweets from his donkey cart round the villages.

Arthur died in April 1923.  The bill for his funeral, from Amos Driver and Sons came to Six pounds and Eight shillings.

Arthur played his part in those early days of Primitive Methodism, and what he and others did is part of our heritage today.