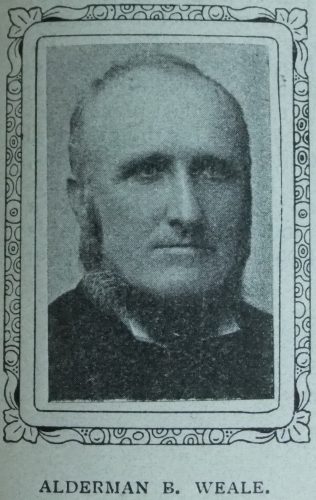 The Deputy-Mayor of Ludlow – Alderman B. Weale – has during a remarkable and strenuous local preachership of forty-three years merited a place in this Gallery. Having a Wesleyan parentage, heredity and environment assisted in his becoming the character he is. At the age of eighteen a spiritual crisis entered his life. Sin became an awfully real thing and God its sure avenger. He resolved to be free from it or to perish in the effort. The struggle was in the farm shed, and there assurance entered his consciousness which he has possessed ever since.

On removing to Ludlow he pioneered a new society on the outskirts of the town which has been the centre of an earnest and aggressive evangelism for upwards of thirty years. Although the head of a large business, he has found the time to conduct missions in large centres as distant as Blackheath, Darlaston, Church Gresley, Scarborough and Barnsley. Still his best work has been done in his own circuit, which he still services in full natural vigour and unsullied reputation. He is a class leader, society steward, trustee for five properties, and has served as station steward. He has represented his Circuit in District meeting twice, and has been pressed to go on to Conference. It is his joy to be united in good works by a Christian helpmeet and an extensive family.

Last year he worthily filled the mayoral chair of the borough, and was urged by both parties to retain it a second year. His acceptance of office was conditional that the Corporation and town officials accompanied him to his own place of worship, which was done with uncommon heartiness and unanimity.

Benjamin was born abt 1846 at Onibury, Shropshire, to parents Thomas and Sarah. Thomas was a carpenter.

Benjamin’s ‘home’ chapel was East Hamlet Church in the Ludlow Circuit. His obituary records that religiously, Benjamin was a practical mystic. He bore his witness with an emphasis of certainty and passion that made people wonder. His theology was severely puritanical, and his zeal in declaring the “whole counsel of God” most impressive.

Benjamin married Betsy Evans (abt1848-1887) in the spring of 1868 at Ludlow. Census returns identify ten children.

Benjamin married Mary Kirkham (1845-1924) in the spring of 1889 in the Dudley Registration District, Staffordshire.

Benjamin died on 6 May 1920 at Ludlow, Shropshire.