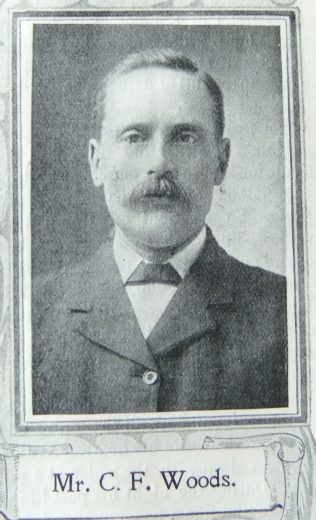 Charles Francis Woods was born at Docking, in Norfolk, thirty nine years ago. Cradled in Primitive Methodism he had the advantage of godly parents. At an early age he publicly yielded himself to Christ, and soon came on the plan as a local preacher. Eighteen years ago he came to reside in Fincham. His services have been much in request. His loyalty to his own church has been seen in own way that is worthy of note.

On the death of two of his loved ones he has insisted on having his own minister to conduct the burial service in the churchyard. In these villages that means much. His election to the office of Brach Steward was an appointment for which he is well fitted. He has the joy of knowing that since the Fincham Branch of the King’s Lynn Circuit was formed no financial help has been needed from the parent station. He hopes soon to see the Branch made an independent circuit. We pray that many years of service may yet be his.

Charles was born in 1858 at Docking, Norfolk, to parents Robert and Elizabeth. Robert worked the land.

Before moving to Fincham, Charles worked the land. He then became a baker.

Charles died in the spring of 1918 at Fincham, Norfolk.