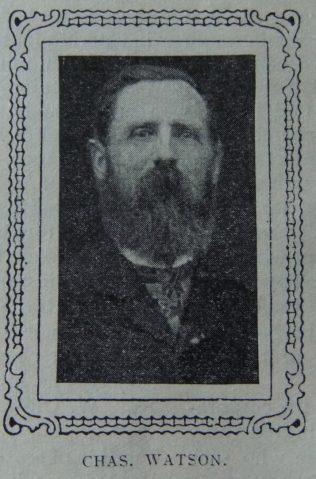 Mr. Charles Watson was born at Thornton-le-Clay, October 18th, 1852, and started work on a farm when only seven years of age.

He was converted in Malton Primitive Methodist Chapel. While engaged as a signalman at Pitmoor, he did good work in Sessay.

When leaving for Gilling his wife said, “If there is no Primitive Methodist Society we will establish one.” They soon opened their house for services and gathered a number of young people to a Bible class which he conducted in his house on Sunday mornings. Several of these were converted and a class meeting formed with Mr. Watson as leader.

Then came the need for a chapel. How it was built cannot be told in this short sketch. The Squire refused a site. Representation was made to the North Eastern Railway Company and a piece of land obtained.

It is very interesting to hear him tell how money was raised, and the chapel opened free of debt. Being a man of indomitable perseverance he lost no opportunity of soliciting help, and is now frequently referred to as the man who built Gilling chapel and opened it free of debt.

Mr. Watson is natural, and real; he has nothing superficial about him, possesses an independent mind, and is true to his convictions. He is a regular attendant at the public services, unless ill or away from home, and the same regularity characterises his attendance at the class which for him has a strong attraction and peculiar charm. He frequently visits his members and prays with those who are sick. He has been superintendent of the Sunday school ever since its inception.

Charles was baptised on 1 December 1852 at Foston by Malton, Yorkshire. His parents were William Heseltine Watson, a cordwainer (shoemaker), and Hannah.

After initially working as a farm servant (1871), Charles became a railway signalman and worked in several locations.