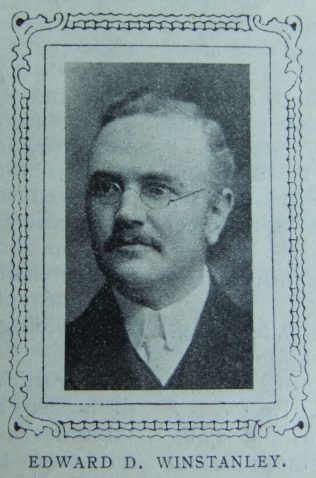 THE subject of this sketch attains his majority as a Society steward this year, and the Jubilee Drive Church, Liverpool Third Circuit, is to be congratulated on so faithful a worker. Twenty-one years ago he took the office, and since then, week in and week out, he has with commendable diligence and loyalty discharged the important duties demanded by the position; nor is he “weary in well-doing.”

The country people speak of certain trees as “ground-grown”; that is, they are not grafted on to a foreign stock. Possibly Mr. Winstanley’s length of service in a city church is in a measure accounted for by the fact that he was born in Liverpool, and was converted forty-two years ago at a Camp Meeting held in connection with the Boundary Street Church, during the superintendency of the late Rev. Wm. Wilkinson. For some seventeen years he was associated with the Church there as Sunday school teacher and Secretary. Business demands led to his removal to the east side of the city, when he joined the Kilshaw Street Society, in the Liverpool Third Circuit. Jubilee Drive Church is a development of Kilshaw Street, and when the new church was built Mr. Winstanley became a trustee and, in 1891, he was called to the office of Society steward. There have been entrusted to him and his good wife a son and a daughter, each of whom have for years been excellent workers in the Sunday school and Christian Endeavour Society. The son is his father’s assistant in the stewardship.

Our friend is a prosperous business man, generously hospitable, kind hearted. “He seeks peace and pursues It.” The success of his Church is part of his life. Nature has so mixed the elements in him as to give to the world and the Church a true gentleman.

Edward was born in 1854 at Liverpool, Lancashire.