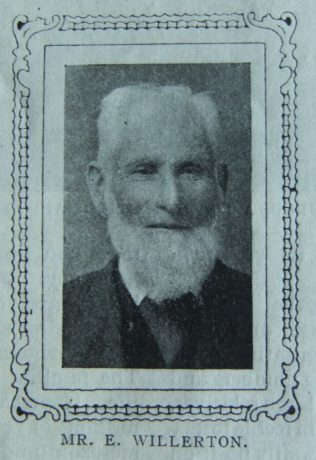 MR. E. WILLERTON has grown grey in the service of Christ. He is seventy-five years of age, but his eye is not dim, nor his natural force abated. He is still young in heart and takes a deep interest in all that affects the welfare of the church. His love for God’s House has grown with the years, and his place is always filled, unless prevented by illness. Converted to God nearly fifty years ago, he joined our New Road Church, and has been a devoted and consistent member up to the present. Very soon a sphere of labour opened to him, and he was made Society steward, a position he holds to-day. He is also treasurer and trustee of New Road, both of which offices he efficiently fills.

Our brother has wide sympathies, and takes a practical interest in every form of Christian and philanthropic work. He possesses a genial disposition and is most exhilarating company. He has the gift of humour, and makes a capital chairman keeping the congregation in fine spirits from beginning to end.

He takes an interest in public work, and a few years ago was elected a County Councillor, beating a local publican, after a strenuous fight.

He has been happy in his home life. Mrs. Willerton has helped in all good work, and a few years ago they celebrated their golden wedding amidst the felicitous rejoicings of many friends. We pray for him many more years to serve the church he loves so well.

Men of his stamp improve with years, and, as they grow older, increase in wealth of saving and helping influence. The younger men will be all the better for the lengthening of this useful life.

Edward was baptised on 2 October 1836 at Fletton, Huntingdonshire. His parents were William, a labourer, and Mary.