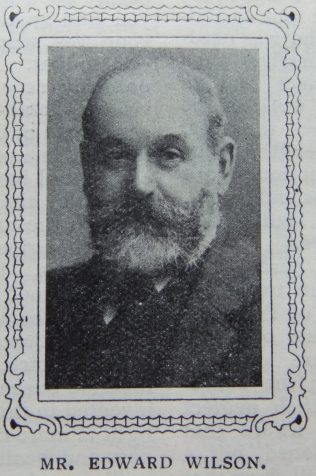 Brother Edward Wilson was born of Godly parents at Ruston Parva, one of the smallest villages in one of the largest of our Circuits, viz.: Driffield. He came as a youth to Bridlington. He was nearly 30 years of age before he made the “great surrender” and experienced the momentous change which regeneration implies. This vital experience he realized at his own bed-side at the midnight hour. He was no sooner converted than he joined the church, and in addition, gave himself up to service by entering the Sunday school as a teacher. From that time to the present he has served with unwavering loyalty for 29 years, during which years he has acted as superintendent 14 years, and also as a president of the Bible Class 14 years.

Two features have characterized his work during the whole time, viz: punctuality and regularity; hardly ever absent – except in sickness – and only once five minutes late!

For 15 years Brother Wilson has been a Class Leader. He took to a “forlorn hope,” and all know that to resuscitate a moribund class is more difficult and disheartening than to get up a new one. Yet by consistent character, devoted energy, and bright spirituality he has secured a strong class, which is vigorous to-day. Whoever else may not be present, Brother Wilson is; whoever may not appreciate such means of grace, Brother Wilson does most highly.

Another form of service in which our brother takes great interest is the C.E., of which he has been president 13 years.

These varied forms of Christian activity indicate the desire of our friend to help the young life of our church. He is wishful, however, that the help shall be of a truly spiritual character.

Census returns give the following occupations for Edward.

Edward married Margaret Spink (1853-1939) in the spring of 1875 in the Driffield Registration District. Census returns identify four of five children.