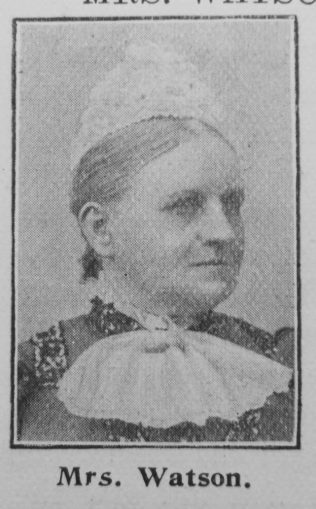 Transcription of Obituary In the Primitive Methodist Magazine by Wilson Eccles

Eleanor, wife of the Rev. Dr. Watson, who died at Higher OpenShaw, Manchester, on April 3rd, 1901, was the daughter of the late Mr. and Mrs. Ralph Cook, of Newcastle-on-Tyne. Her parents were Primitive Methodists; her mother (a sister of the Rev. Joseph Spoor) having been herself a short time in the regular ministry. The subject of this sketch was born in 1846, and at the Ballast Hills Chapel at the age of eleven. Becoming the wife of the Rev. John Watson in January, 1870, she entered what proved to be a very varied field of Christian usefulness, and in it she laboured for thirty-one years with all her heart. Hartlepool, Spennymoor, and North Shields were the scenes of the early period of her married life, these being followed by ten years spent at Aliwal North (1879-84), and Adelaide (1884-89). In all these stations Mrs.Watson was greatly beloved by the people among whom she and her husband laboured; and in all of them she was exceedingly earnest in spiritual effort, teaching in Sabbath schools class leading, and visiting the sick. While in South Australia she was greatly blessed by hearing Dr. R.W. Dale expound the doctrine of holiness, and shortly afterwards by a visit of the Rev. Geo. Warner, whom she entertained as her guest during a mission. She often spoke of these two events as having marked a crisis in her religious experience, and her after years were certainly marked by a remarkable trust in God, and power in Christian service.

Returning to England in 1889, she was four years in the Chester First Circuit, where she was specially interested in the welfare of the young people, many of whom were won to Christ by her influence. Then she removed to the Manchester College, and during the five years of Dr. Watson’s term as Principal, she not only managed the household arrangements so that the comfort of the students was secured to a very high degree, but she also strove to promote their spiritual life. Since her death many letters have been received from young ministers who passed through the college during those years, expressing their high appreciation of her christian character and their gratitude for all her gracious ministries to them. These were trying times, for the college was more than doubled in size, and this without any shortening of terms or hindrance to the tutorial courses, and the credit for this achievement was freely given by the college committee to Mrs. Watson. In 1898, Dr. Watson and she went to the Manchester Ninth Circuit, where for twelve months she continued to be active both in home and church. Then her health began to fail and she was obliged to relinquish her toils one by one, as for fifteen months her strength wasted. Just before the Christmas of 1900 she seemed much better, but the hoped-for recovery was not to be. In February she lost strength again, and sank gradually until April 3rd, when she passed quietly and peacefully away to be “forever with the Lord.” During her illness it was very beautiful to see her perfect confidence in Christ and in her Father’s love. Her triumph in the Saviour was perfect – an inspiration to all who saw her. Her life’s work was well done, and she would receive a manifold welcome to the everlasting kingdom of Jesus Christ. Many letters of sympathy were written by friends to Dr. Watson and are treasured by him. We close with a quotation from Professor Peake’s:- “Among all the good women whom it has been my privilege to know, she stands out among the very best. She was a true saint, who walked with her God, and spent herself in active devotion to His service. I feel her unpretentious goodness at once a stimulus and a rebuke. I do not know that the trite saying ‘Earth is the poorer that she is taken from us’ is really true, for while to you who lived with her this must be true, yet to us she will remain a sacred memory, enriched with that reverence and tenderness which death only can give. But certainly the assurance that she will be there to welcome us makes heaven itself more home-like. We have not lost her; it is the triumph of Jesus that even the grave is radiant with hope. Only a little while and the dear friend we have loved so much will once more greet us with the old smile and kindly word, as she has herself been greeted to our Father’s house.”