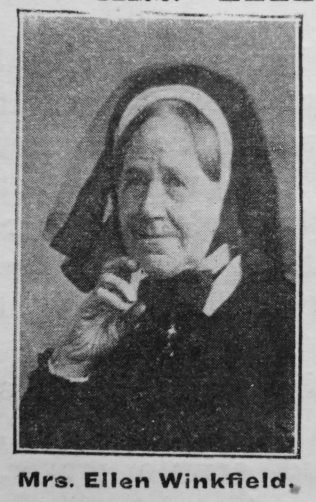 Primitive Methodism has been greatly indebted to its stalwart missionaries and evangelists, its ministers and officers, but it has been almost as greatly indebted to the wives of these men who have made untold sacrifices in order that their husbands might serve the Church of Christ and fulfil the ministry entrusted to them.

Especially has that been so in the Eastern Counties, where wide circuits have necessitated the prolonged absence of husband and father from the home, and thrown the care and responsibility of home and family largely on the shoulders of the wife. What Marthas have served in the little preacher’s house not far from the chapel – frequently adjoining it – for was it not an unwritten law that the preacher’s wife must always be within call to give attention to any matter affecting the Church in her husband’s absence? She must not live far away. She was expected to attend the public services with some measure of responsibility. If preacher was late, the enquiry soon reached her, “What are we to do?” If preacher failed, she had to be counsellor, adviser, and possibly preacher for the service. She must lead one at least of the classes, and be a very prodigy in visiting the sick and the sorrowing. It was not a Connexional rule. It never found its place upon the statute-book of the Church, but, like many another custom, it grew into all the rigidity of a law because of the regularity with which such valuable service was rendered by many of the wives of the “travelling preachers.”

How they managed to attend to the duties of home is beyond one’s imagination. And yet they did. What memories of the little preachers’ homes abide! They were not large. Servants were quite a rarity. Voluntary helpers were far more frequent. ” There, you go to class; I’ll stop and mind the children,” was a frequent offer by some godly soul as interested in the class as the preacher’s wife. And “minded” they were. “Mother, is it class-night?” some sturdy youngster would ask. “Is Mrs. Jones coming in to-night? ” “Yes.” And the skip and dance would indicate the youngsters satisfaction, for did not Mrs. Jones generally come with some special delicacy tucked away in her capacious pocket – some home-made toffy, some apples out of the orchard, some home-made cakes, made on purpose for the minister’s children! It was a fine comradeship, dying to-day because of changed conditions, but delightfully helpful in those days.

To all this some preachers‘ wives added the additional service of occupying the pulpit. How they managed to find time for preparation no one knew. But find it they did, and prepare they did.

Some of those who helped to make Primitive Methodism in East Anglia were no mean preachers. Elizabeth Bultitude was a plodding evangelist; Miss Wales was a poet-preacher of the first order.

Mrs. Winkfield, like her husband, was a Boanerges in the pulpit. She was a spare, thin, lithe, little woman, with a masculine voice, wonderful strength, and immense energy. Her husband, John Winkfield, was one of the great evangelists of the day – a big, broad-shouldered, herculean man, with a voice like thunder and a courage that never quailed before the roughest crowd. He did fine service for Christ, and in all his efforts was finely supported by his “little wife.” How mightily she could pray! “When a woman knows how to pray, few men can equal her,” said a critical brother in recent days as we listened to the earnest pleading of a saintly soul. But somehow the art seems to be more or less lost. How these women could pray! It was strong wrestling with God, until a strange awe filled the place and a mighty influence rested upon the people present. They learned to pray at the family altar, for, with the husband mostly away from home, the priesthood of the family largely rested on these godly women. But they carried the art into the public service, and there pleaded with God, until men knew that the secret of the Lord was with them.

Mrs. Winkfield carried that same power into the pulpit. No delicate nervousness seemed to put tremor into her voice. She was called to proclaim the message which had come to her. She disclaimed the idea of preaching. But she had a message to give, and give it she did, with tender pleading or vehement declamation.

It was a cold, wintry evening. We found an announcement that Mrs. Winkfield was to preach in the chapel of a little Suffolk town. It was almost the last time she undertook the task. We gladly wended our way to the plain, square, barn-like building. The congregation was not large, yet large for the cause in that town. Expectation ran high. She mounted the pulpit, plainly and neatly attired in quaker style. Softly she gave out the hymn and prayed. It was real prayer, pleading with God. She knew Him, and told Him what she wanted. Men and women were away – far, far away – and she wanted them brought home. Mother-like, she remembered the boys and girls. How she wanted them home – home from the far-distant land! “Home, Lord Jesus, home! ” It was mighty pleading, the outpouring of passionate desire.

And then came the sermon. “ He shall drink of the brook in the way, therefore, shall he lift up the head.” There was no question about the authorship of the Psalm or its interpretation. Without any doubt it was accepted as purely Messianic. It referred to Jesus Christ. He was the Lord who should sit upon His throne until all His enemies were made His footstool. Critical interpretations did not trouble these earnest souls. They saw the Christ in all the Old Testament prophecies and history and found Him in parable and symbol and metaphor. And, without any hesitation, Mrs. Winkfield preached Christ to us that evening. She knew no other theme. Just as all roads led to Rome in olden days, so all texts led up to Christ. It was a sermon on the passion and triumph of Christ. He had to drink of the brook by the way. He had to taste the bitter cup and drink it to the dregs. He had to know the sad experience of pain and suffering, of humiliation and betrayal. There was no other way to the crown but by the Cross, no other way to the throne but by the brook, no other way to redeem men but by sacrificial suffering. Yet He did not hesitate; He did not falter. He drank of the brook by the way, though it was mingled with gall. He bore the humiliation and suffering of the Cross. And because of this He has lifted up His head. He has triumphed because He suffered, and He shall finally reign because of His redeeming work. It was a fine presentation of the atoning work of Jesus Christ, and though critics might question the exegesis of the text, the congregation that night was greatly edified, and went away rejoicing once again in Christ their Lord and Saviour. Into that sermon was put all the passion and pleading of a woman’s heart. Sometimes the masculine voice rang through the chapel in stentorian tones, but mostly the sermon was the pleading of a woman’s voice for her Lord and Master. It was the last time we met, but the memory of that service lingers, its influence abides, and no one can tell the wonderful power such ministry has had upon the somewhat slow and stolid nature of the East Anglian people. When the ordinary presentation of the Divine Message has failed to win men to Christ, hundreds of men and women have been won by such tender pleading and such passionate service.

How these saintly souls toiled! What miles they walked! Sometimes one or two of the children would walk by mother’s side to a country village, sure of a hearty welcome there for mother’s sake. They were red-letter days, for the strongest lad would be proud of the homage paid to his mother for her Christly service and her tender ministry. In many ways the home would suffer, but, as F.R. Havergal finely says, “There are wondrous compensations in life,” and if the home suffered on one side, the fragrant memories of such service remained very precious even when son or daughter wandered wide. One son has wandered away from the old path. You may meet him now in the various markets of this country, with his father’s fine round face and burly form and magnificent voice, that can be heard above the din and roar of the busy mart; but only mention his mother’s ministry, and the tears will come to that clear eye, and the voice will grow strangely husky as he says: “Ah, she was a good woman! She was a splendid mother! ”

Yes, these saintly women managed to keep the home beautiful and fragrant. They were passing rich on fifty pounds a year; we wonder how they did it, yet they found time to share in the wider ministry of proclaiming the Gospel of Christ to men. Their record is on high.

For information about her family follow the link to Rev. John Winkfield.

Obituary (57 KB Adobe Acrobat document, opens in a new window)
Transcription of her obituary published in the Primitive Methodist Magazine 1904