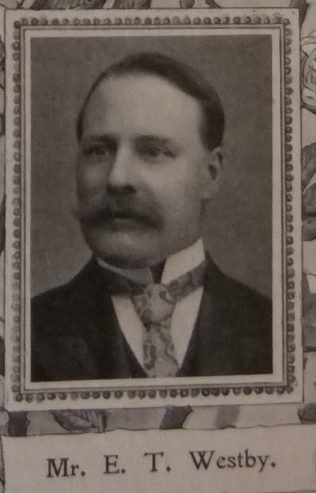 Mr. Ernest T. Westby, Circuit Steward of Sheffield First, has had a life-long connection with the Bethel church. Enrolled in the class book while yet a child by his devoted mother, he has remained faithful to her counsels, and, though he is still in the prime of life, his unbroken membership covers a lengthened period. Mr. Westby’s gifts lie in the direction of organisation and administration. In many positions involving much laborious detail, he has rendered willing, abundant, and efficient service. For years he was a useful Sunday School teacher; latterly, he has taken an active part in the work of the Adult Bible Class. Mr. Westby has stood by the Bethel church during the difficult days of decline arising from the removal to suburban churches of so many of its workers; he is now Secretary of the Central Mission movement which is striving to raise it.

Ernest was born in 1867 in Sheffield, Yorkshire to parents Thomas Henry and Hannah. Thomas was a tailor.

As a youth, Ernest worked as an errand boy. By the time of the 1891 census, he was working as a butcher.

Ernest married Elizabeth Hellithorn Pinder (1856-1940) in the summer of 1891 at Sheffield. They had one child who died in infancy.