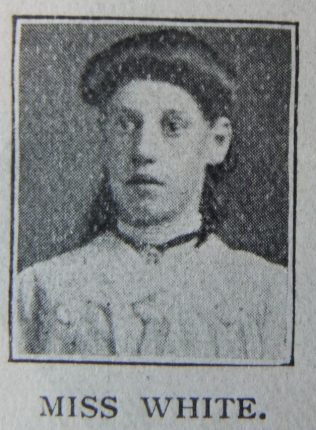 Transcription of obituary in the Christian Messenger

MISS ETHEL MAUD WHITE. – Bradford Sixth Circuit and the Rehoboth Church and Sunday-school have suffered a sever loss by the recent and unexpected death of Miss Ethel Maud White, younger daughter of Mr. and Mrs. George W.D. White, of Bradford. Our sister was only in her seventeenth year when the Master’s summons called her to the higher life of heaven. Born on April 16th, 1889, she had been nurtured and brought up all her life under religious and godly influences, both in the home circle and Sunday-school, and as a direct result of this training she became a devoted member of the Christian Endeavour. She also rendered good service as a member of the choir. She was taken ill during a choir practice, and taken home, where, notwithstanding all that loving care and medical skill could do, she quietly passed away to the home eternal about midnight on the following Tuesday, October 10th. She realised early that her case was hopeless, and yet, though suffering acutely, she gave all instructions respecting her burial, and expressed her confidence that she was going to heaven to be with Christ her Saviour. The Rev. J.C. Livesey called to see her during the afternoon before she died, when she said to her mother, “Mamma, kneel here,” and grasped her hand as she knelt by her side, then, turning to her father, she said, “Dadda come here,” and grasped his hand with her free hand; then looking across the bed, said to her minister, “Pray with me.” All felt that heaven was very near as we prayed and our young sister testified her love for the Saviour and her readiness for her heavenly Father’s will. The first part of the funeral service on October 14th was conducted by the Rev. J.C. Livesey in the Rehoboth Primitive Methodist Church, Bowling Old Lane, in the presence of a very large congregation of mourners and sympathising friends. The choir was in attendance and sang a hymn. “O rest in the Lord,” and the “Dead March” in Saul was played by the organist, Mr. W. Peace. The interment took place in Bowling Cemetery, where all that is mortal of our loved one rests till the dawn of the resurrection morning. The Christian Endeavourers sang the “Roll Call” by the graveside. A very impressive memorial service was held in Rehoboth Church on Sunday morning, Oct. 15th, when Rev. J.C. Livesey preached from “We all do fade as a leaf.” – Isa lxiv, 6.