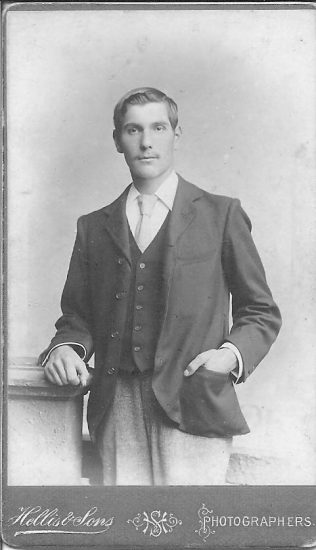 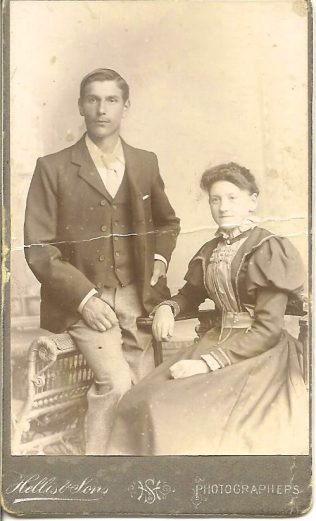 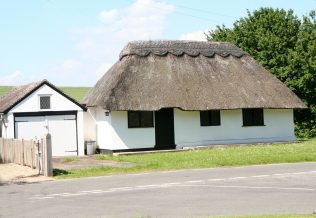 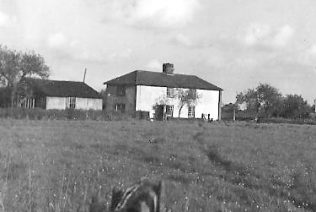 Ether George Wombwell, known as George, was born at Langley in North West Essex on 19th October 1878 , the son of Arthur Wombwell (who was my family’s first link with Primitive Methodism) and his wife Sarah.

He was baptized in the Primitive Methodist Chapel on 22nd December 1878 by George Newton – the Primitive Methodist Minister, and the Baptismal Certificate indicates that it was recorded in the Register Book of Baptisms at Saffron Walden in the Saffron Walden Circuit. Ether is spelt “Etha”  on the Certificate and sometimes found as “Ephia”  in other places, but George always said it was Ether, and a biblical name.

He grew up in the village of Langley where his family had links with the Primitive Methodist Chapel.   The education he had received in the village was elementary and it was there he began work. The family were quite poor and he had a story of how he had at one point to go out and sell a cream jug to buy the next meal –which he later repurchased, and made the resolution that if he got on in the world his family would never go short of food.

TO WORK IN LONDON

Later on he went to work on the railway in North London using the building skills he had acquired, and made contact with Grafton Road Primitive Methodist Chapel, and in July 1901 was presented with a Bible for his help in the Sunday School.

While in North London he met Rachel Dorothy Camp who was born at Waltham Abbey on 31st January 1882 and baptised on   12th March 1882 at Crossbrook Congregational Church Cheshunt. Rachel’s mother, Eliza, had been born in Barley, a village next to Langley, but had been in service in North London.  She had married and gone to Australia where her first husband had died and she had returned and married Charles Camp, settling in Waltham Abbey. The Camp family had links with the Salvation Army but George soon turned Rachel into a Primitive Methodist.

RETURN TO THE VILLAGE

He returned to the village bringing Rachel with him, and on 21st November 1903 they were married  in the Parish Church of St John the Evangelist at Langley by the Vicar, The Reverend A B Hobart-Hampden, after Banns, with the witnesses Charles Camp (signed with an X) and Ethel Camp (brother and sister of Rachel). George’s profession was given as a Bricklayer.

They lived in a small thatched cottage called “Friday Shop” on Langley Lower Green and it was there that their first child was born, a daughter, Evelyn Dorothy, on 18th of September 1907. It was after this that George obtained a house on the Upper Green at Langley called ‘Laburnum House’ (so called because of the Laburnum trees planted in the front garden). It had at one time been a “Dame’s School” and was of reasonable size. It was there he began to work towards establishing his building business.

At Laburnum House the second daughter, Florence Hilda (my mother) was born on 12th of August 1909, and the third daughter, Edna Mabel born on  30th of October 1911. At this point there was taken into the family a nephew, Frank Hughbourne Wombwell, whose mother has died and the children were taken care of by other members of the family.

It would seem that things were going well, with a family established and plenty of work in hand.  But then in 1914 the war arrived, and George joined the Army.

His War Service Record from World War One Soldiers Documents New Soldier’s Record, reveals that he signed for short service for the duration of the war with the Colours,  and in the Army Reserve.  A Statement of the Services of No 72069,  Ether George Wombwell tells us he was Attested on 10th of December 1915, given the rank of Private, and  allocated for General Service and put on Army Reserve.

He was mobilized on  6th of November 1916 and posted to Station on the 7th, where he was rated on the 8th.  On 28th of March 1917 he was transferred to the 5th Company of the London Labour Corps and went on to serve in France but by  8th of January 1919 was back in England.  On 5th of February 1919 he was transferred to class Z Army reserve on demobilization at Nottingham.

Forms from Alexandra Hospital, Cosham and the Ministry of Pensions dated 1st of October 1919 indicate various disabilities aggravated by his army service , Varicose Veins, Myalgia (pain in the muscles)and a Rheumatic disability.  As the Degree of Disability was 30% he was granted a pension of  8s/3d  (eight shillings and threepence) with Bonus from February to September 1919 conditional to be reviewed in 54 weeks with allowance for wife and 3 children of 4s/9d (four shillings and ninepence).  He eventually recovered from his disabilities and went on to live a normal life.

After the war George established his little building firm using local labour – many of them Methodists (at one time I think there were four Local Preachers).  A lot of the work was in the local area with much of it on farms. Two bungalows were built in the village but some work was farther afield with the building of a bungalow at Holland on Sea (near Clacton) – the team would stay during the week coming home for the weekend, and the building of a house at Cuffley in Hertfordshire.

He was always concerned for the welfare of those who worked for him and would never stand men off even in the worst of weather.

During this period George had one of the first cars in the village, a T-Type Ford, and then later a lorry for the building work. He never leaned to drive, but relied on other people.

He served as Chairman of the Parish Council and was the local Representative on the Saffron Walden Urban District Council for many years. He served as a Manager of the Local C of E School. George, like his father Arthur, was a supporter of the Liberal Party. He had many other interests.  He was a keen cricketer and did a bit of shooting with permission from some of the local farmers.  He was a member of the small village brass band,  which rehearsed in the Chapel Vestry (I believe he played the euphonium).

But above all it was Primitive Methodism that was the greatest influence. In 1934 it was said that he had been a Society Steward for 20 years, and he certainly continued after that and served as a Trustee. He began preaching and preached for many years without becoming Fully Accredited. The Local Preachers Who’s Who published in 1934 gives 1932 as his year of appointment. (I guess that he was appointed to come through into the Union of 1932). I believe that at first he travelled on a Penny-Farthing bicycle – then a pony and trap – and eventually by car (still depending on someone to drive him).  He had a very powerful voice and it was said if he was speaking at the Camp Meeting on the Lower Green you could hear him on the Upper Green over half a mile away

It was the Second World War that changed things. The little building firm was broken up and the lorry and car commandeered for the war effort, with some of the workmen having to join up. George tried to join up but was too old, and so he joined the Home Guard instead.  Still a Councillor, he was  involved in helping to find accommodation for evacuees from London. Through the war he was involved with helping wherever he could with various building jobs, often cycling many miles to do a job.

After the war he continued to be involved with the little Chapel. He was instrumental in organizing two Cliff College Missions sponsored by the Chapel but I think that he helped to pay for them, and I know that he and my Grandmother provided accommodation for the Evangelists.

Other stories exist about George Wombwell, such as when the Preacher one Sunday afternoon was giving a lecture on Dick Shepherd rather than a sermon and George stood up and said “Let’s have the gospel brother!”

MY MEMORIES OF HIM

One of my memories of him is walking to the Chapel, which was just a mile from Laburnum House. He would be dressed in his Sunday best – black jacket, pinstriped trousers, starched front (over his clean working shirt) with a tie, a bowler hat and walking stick. Then arriving at the Chapel and greeting those already there, and addressing them as “Brother” or “Sister” which I found confusing, for whilst we were related to many in the village I could not work out the connections with them all. It was only later that I realized it signified the relationship that existed between the members of the little Primitive Methodist Chapel.

He never knew that later I became a Local Preacher, went to Cliff College, and on to become a Minister, but I am sure that he would have rejoiced in the fact.

Ether George Wombwell was a great character, and a Primitive Methodist through and through.