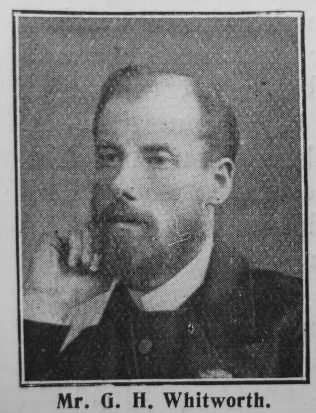 Transcription of Obituary In the Primitive Methodist Magazine by J. Redhead

On Tuesday, April 16th, Mr. G. H. Whitworth, of Gainsboro’, put off mortality for life at the comparatively early age of 44 years. Mr. Whitworth was born at Brigg, January 11th, 1857. His father was a member with the Wesleyans, a godly man, and strove to imbue his son with godly principles and high ideals. When quite a young man, Mr. Whitworth came to Gainsboro’ as apprentice to the printing trade, and had the honoured distinction of spending the whole of his working life in that one establishment, rising to the trusted position, and greatly was be trusted and respected by the firm.

As is too often the case, Mr. Whitworth as a youth forgot the early instructions of his father, and wandered in paths of folly and negligence of Divine things, usually spending his Sundays in pleasure, but rarely attending on the House of God. He became engaged to a Christian young lady, and often did he try to break from the House of God and Divine things, but in vain. Her fidelity ultimately conquered, and he was led to the place of prayer, and ere long God’s Spirit began to strive with him, and he longed to know the inward peace of which Christian people spoke. Still a long struggle was before him; he scarcely conceived it possible to be suddenly converted. He thought he must “do” to be saved, and he longed for some Christian to help him into the light. One Sunday evening, when the Rev. F. Rudd preached, he resolved to stay to the prayer-meeting, and though he did not then and there receive the joy and glory, yet he afterwards said that he was sure that there God saved him. He at once put on the harness for Christian service and entered the Sunday School as teacher, and afterwards became Assistant Superintendent, and also the teacher of a large Bible class of young men, many of whom are now in active association with the Church as local preachers and Sunday-school teachers. It was, however, in connection with the choir that Mr. Whitworth rendered his principal service. For twenty years he was connected with it, and for ten years of this time he was choirmaster, and by his close attention, combined with exceptional ability, he raised the choir to a high degree of proficiency, and it still retains the reputation of being the best choir for many miles around. Not only as conductor, but as a composer of music, he gained a very high reputation. A few of his compositions have been published and gained a very wide circulation: “The Orphan ’s Prayer,” “Guide me to Rest,” “Why do the Angels stay so long?” and “No Night in Heaven,” are pieces of wonderful pathos and sweetness, and many have been melted and helped nearer to God as they have listened to them. Many, indeed, are the testimonials, not only from all parts of Great Britain and Ireland, but also America, of the excellencies of these compositions, and the help they have afforded to troubled ones.

It was, however, in connection with the “Crystal Prize Choir” that Mr. Whitworth won his greatest distinctions. In 1894, at the invitation of the National Temperance Choral Union, he organised a choir to take part in a choir of 5,000 voices at the Crystal Palace, and in October of the same year, at the choral contest at Nottingham, where they took the first prize. In 1896 they took part in a choral contest at Birmingham in connection with the National Choral Union, this time taking the second prize; and in September were by telegram invited to sing at Hawarden Castle at the great fete and Brass Band Contest, when the conductor had the honour of being presented to Mr. Gladstone, who expressed great satisfaction and pleasure at hearing the choir sing. Mrs. Drew wrote:—

Hawarden Castle, September 11th, 1896.
Dear Sir,— Mr. Gladstone desires me to say that he greatly admired the part songs and the manner in which (elaborate and difficult as was the music) they were rendered.

This was high praise, of which Mr. Whitworth was justly proud.

It was much to be hoped that a life so valuable might long be spared for the service of God and man, but He who ordereth all things appointed otherwise. Much of this work had been done in bodily weakness and weariness prophetic of an early close, and in the autumn of 1897, much to his regret and also of the choir, he was compelled, through loss of voice, and the insidious progress of disease, to relinquish the work he so dearly and enthusiastically loved. This event was marked by the choir and trustees presenting him with a beautiful timepiece. The Rev. T. Storr wrote on behalf of the Trustees expressing their great regret at his severance, and recognising the ability and devotion with which he had filled the position, and the high standard of excellence the choir attained through his labours. It was hoped that rest might enable him to regain strength, but it was not so. For some time he continued his daily employment, but amid great bodily weakness, struggling heroically to resist the ravages of disease. Rest, change, nursing, medical skill were all in vain, and in the autumn of 1899 he was compelled to abandon his employment altogether. For several months he patiently suffered the Divine will. Sometimes he felt perplexed as he thought on the Divine providence, and wondered why hls life should thus be cut short. But resigned to God’s will, he felt and believed the reason would appear bye-and-bye.  He had an intelligent trust in Jesus Christ, and though the ordeal through which he passed was very severe, yet, when God had perfected him, he was confident of the glory awaiting him. Towards the end he longed for release. When he learned of the death of Mr. Perkins, he said, “Oh, if I could have gone, and he had been spared.” A friend said to him one day, “Why do the angels stay so long?” quoting the title of one of his pieces. He answered, “Ah, if I could sing that now, I could do some good.” But his singing days on earth were over. He would sing no more till he joined the white robed choir in heaven, and on April 16th he quietly passed away to the heavenly land of song. His remains were laid to rest in the Cemetery amid many tokens of deep respect and esteem, there to await the resurrection morn. The Rev. J. Redhead conducted the service and also conducted a memorial service on Sunday evening, May 5th, from the words in Rev. xiv., 2 – “I heard the voice of harpers harping with their harps.” The choir rendered several of Mr. Whitworth’s pieces.
“No night shall be in heaven – No night there.
The clouds will all be riven – No night there.
Golden sunbeams shining bright,
Shedding rays of radiant light, ‘
O’er yon landscape pure and white – No night in heaven.

George was born to parents Henry, a smith and later an engine fitter, and Mary.

George married Rebecca Ladlow (1865-1934) in the spring of 1888 at Gainsborough, Lincolnshire. Census returns identify one child.