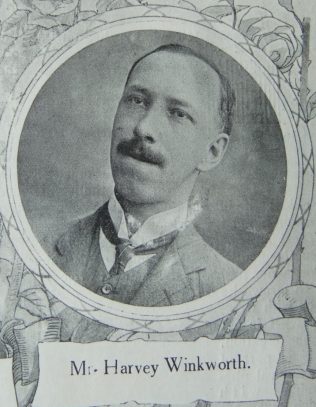 Mr. Harvey Winkworth was born at Woodcote, near Reading. He is the son of Christian parents, and cannot remember the time when he did not serve the Lord. Brought up in the Church of England he glided into the Christian way. Circumstances favoured his joining the Primitive Methodist Church in 1886 in the Reading Circuit. In 1889 he left Reading on architectural business, and after two years in the Midlands, settled down in Ipswich, and at once threw in his lot with the Rope Walk Society, in which he has found a congenial home. Nine years ago the Circuit honoured him by offering him the Circuit Stewardship, which office he still holds. He has several times been representative at the District Synods, on which occasions he has honoured his Circuit. Our brother is also an acceptable evangelical preacher. May he live long to serve the Church of his choice, and find increasing joy in the work he loves.

Harvey was born in 1872 at Woodcote, nr Reading, Berkshire, to parents Thomas and Harriet. Thomas was a bricklayer foreman (1881).