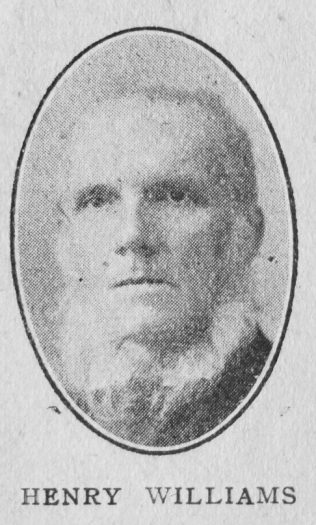 Transcription of Sketch In the Christian Messenger by G. Osborne

“EVERYONE’S friend and no one’s foe,” is a phrase truly descriptive of the man known over a wide constituency. and admired by all for his sterling qualities. Industry and humility characterised the life of his forbears in the little cottage on the woodside at Black Park in the Rhosymedre Circuit. Henry Williams was born on April 16th, 1843. In his early years he recognised the qualities of his parents,  and sought, by a noble emulation of their virtues, to fit himself for the tasks of life.

In those days Primitive Methodists worshipped in a cottage on the pit-bank occupied by the late Henry Lloyd, whose life is still fragrant.

To this Christian home Henry Williams went to worship, and to receive Biblical instruction in the Sunday school. His conversion took place when he was fourteen years of age, and his membership has been continuous for sixty-four years. Beginning to work as a door-boy in the pit when seven years old, he was engaged in the mining life until he attained to his seventieth birthday. The desire for knowledge was strong, and though he had no day school education he obtained a fair grasp of the elementary subjects by attending night classes after the long working day was ended. Down the years he has been a constant reader. His power to assimilate and retain his reading has been of great service both to himself and others. Quiet in disposition and modest in manner, he never pushes to the front, but gets there by the general affirmation of his real worth. For over sixty years our brother has been a diligent Sunday school teacher, and over fifty years a local preacher. His preaching, while not eloquent is effective in the best sense, and marked by a quaint native style. Many of his sermons contain references to the work of the miner, and a phrase of the pit is often used to enforce a truth of Holy Writ. If he preaches from a difficult text he says, “Every seam of coal has slag in it. If I don’t get much coal out of this text, I’ll try to get the slag off it.” Speaking of ‘Saul hurrying to Damascus to persecute the Christians he will say, “But the Lord put a locker on his wheel.” The miners of his congregation know what he means, and he gets the truth home.

For many years he has been senior class leader of Black Park Church, and faithful in the training and shepherding of his members. African missions claim his interest, while the bairns of the South East London Mission have had for many years a true friend in this kindhearted man of God.

One who has known him from boyhood says Henry Williams excels as a sick visitor. The value of his ministrations is universally acknowledged, Into homes clouded by suffering and sorrow our friend is welcomed as a bringer of comfort and a minister of healing for the deepest ills of life.

Honoured by his comrades, the young revere his name. He is their proved friend. An honorary member of the Young People’s Institute, he is most attracted by the facilities for mental improvement provided in the reading room, but he will often spend an hour of his now leisurely life talking with the young miners in the billiard room. “Games are splendid for the young men, so long as they don’t go too far,” he will affirm. We think of the time when one of his sons, a first-rate amateur footballer, was made an attractive offer by a foremost professional English club. The appeal of Henry Williams, “You won’t go, will you, my boy?” proved stronger than the gold of sport, and the offer was promptly refused. This veteran holds that recreation must serve the interests of life’s higher game. He knows that “brains are worth more than brawn, and character more than both.”

So lives this aged Christian among a people who love him. Sincerity, sympathy and service truly summarise his life. Still in the full possession of all his faculties, and with sure faith in God, he works for the good of his fellows. Said a friend recently: “When we shall lose him we shall lose a gem.” To this we give hearty assent, but pray that the day may not come yet.

Henry was baptised on 30 April 1843 at Chirk, Denbighshire. His parents were Ephraim and Deborah. Ephraim was a coal miner.

Tracing Henry’s family is difficult. The 1871 census has him living with his parents and unmarried. In later census returns he is married to Sarah Jane (b abt 1842) at Chirk, with five children.

The 1871 census shows a Sarah Jane Williams visiting her father John Roberts with Joseph. In 1871 Thomas appears to be visiting members of the Roberts family. The 1911 census return records Henry and Sarah Jane had been married for 38 years, i.e. the marriage took place circa 1872/3. This is clearly after the birth of Joseph and Thomas. Was Sarah previously married to a Williams?

I have been unable to identify unambiguously marriage or death records for Henry or Sarah Jane. Can anyone add further information?