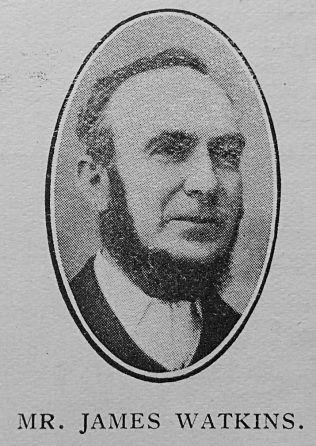 Transcription of obituary published in the Primitive Methodist Magazine by J.H.H.

Mr. James Watkins, who was born at Pontrilas, in Herefordshire, in 1847, and moved to Northampton when twenty-seven years of age, was associated with Northampton Primitive Methodism for over thirty years. Practically the founder of the Harlestone Road Society, of a generous disposition and kind hearted, he figured largely in the history of the Church.

At the time of his death he occupied the post of Society Steward, and had previously served as Circuit Steward, Sunday School Superintendent and Trust Treasurer. Twice he represented the Circuit at District Synod, and had been elected to the chair of the London First District Meeting. In 1901 the Northants Sunday School Union awarded him the special diploma.

His forte, however, was the class meeting. He was an enthusiastic open-air worker, and a man of much prayer. Mr. Watkins served as Guardian of the Poor, member of the School Board, School Manager, and Treasurer to the local Education League.

The funeral on June 17th was conducted by Revs. J. H. Howlett and G. W. Hancock.

James was born in 1847 at Pontrilas, Herefordshire.

He married Matilda Jane Russell (1855-1935) in the summer of 1904 in the Aston Registration District, Warwickshire.