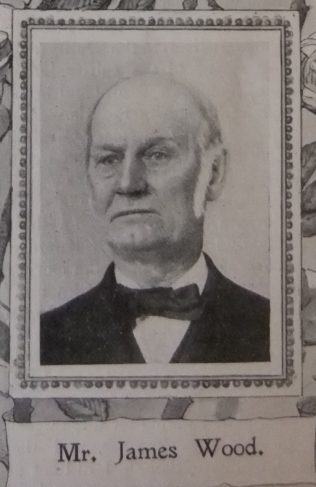 Mr James Wood, Hackney Circuit Steward, is eighty-two years of age. Mrs Wood is the oldest, and Mr Wood the next oldest of the London-made Primitive Methodists, his membership dating from 1839, the year Hugh Bourne pronounced Sutton Street “beautiful for situation.” A local preacher since 1841, he was associated in toil with veterans like Sanderson and Harland. He has preached more than 2000 times, baptised hundreds of children, and has been Circuit Steward fifty-three years. He has rendered magnificent service to London Primitive Methodism, and though now unable to travel from place to place, in mind and heart, in faith and hope he is as bright as ever. He still preaches four times a quarter, and to hear him sing “long my imprisoned spirit lay” to “Sagina” is worth a journey of miles. He is full of fervour and as susceptible to the holy fire as in his palmist days. Duty, self-denial, love have been his watchwords through life and are still.

James was born on 11 April 1824 in Shoreditch, Middlesex to parents Joseph William and Elizabeth. Joseph was a baker. James was baptised on 5 May 1824 at St Leonards, Shoreditch.

James worked as a clerk in a warehouse until the 1870’s when he became a bootmaker. The 1901 census describes him as a retired bootmaker (blind).