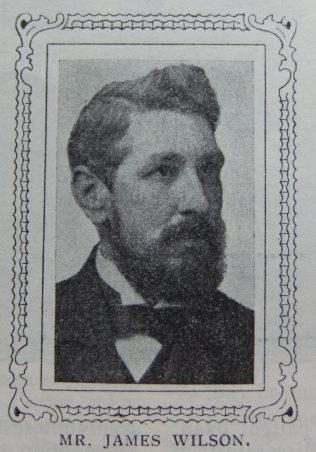 Mr. James Wilson was born at Swinton, on August 12th, 1850. He came with his father to Hoyland Common when a child of eight. His father introduced Primitive Methodism into the village by holding services in a cottage. In 1861 a room was rented from a publican and used as a chapel. In 1865 a chapel was built in Tinker Lane. It was in this chapel that James Wilson was converted about 36 years ago under the preaching of Mr. J.B. Dickenson. At the next yearly meeting he was put into office and has held a conspicuous position in the Church ever since. Three years ago we came into the main street and built a fine church as a cost of £3,000, and in this scheme as well as the erection of the old church Mr. Wilson played a leading part, in fact the church and its many interests seem to occupy a very large share of his time and thought. He has been Society Steward and Trust Treasurer for 15 years, and was Treasurer of the Sunday School many years. Mr. Wilson is a man of deep piety and zeal, he gives of his best in heart, brain and substance to the church he loves, and has trained his offspring to do the same. He is not only a talker, but a worker, and his record of 36 years of faithful Christian service may well be an inspiration to the younger men. Precisely how much the Church owes to him would be impossible to say. It might be comparatively easy to calculate his influence in certain directions, but there are others where no statistics would be of any use. A single personality will often give tone to an entire church, and the example and leadership of a good Society Steward are of immense value.

The position is one of special importance because its occupant is in a sense the local bishop. This does not enable him to lord it over his brethren, but it does require that he shall take a general oversight of the affairs of the society. This he has done.

James was born on 12 August 1850 at Swinton by Sheffield, Yorkshire, to parents William and Harriet. William was a coal miner.

James died in early 1921 in the Barnsley Registration District, Yorkshire.