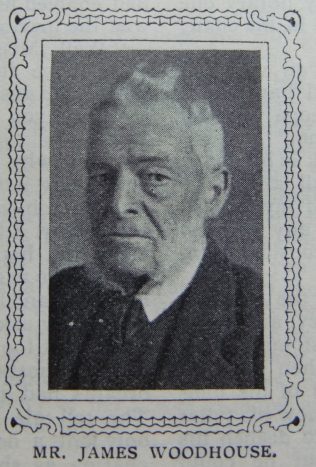 James Woodhouse, of Didby, in the Kingstone Circuit belongs to that noble brotherhood whose names are unknown beyond the confines of their own Circuit, but are ‘writ large’ in the history of our church by reason of the influence they have exerted upon those who have gone forth from the small societies, and become prominent men in church life. The subject of this sketch was born at Kentchurch in 1836. His parents were church people, but were not bigoted, and they, with their children often attended the services conducted by the Primitives in a cottage next door to their home. At the age of 18 James was converted at Newton in Cwm Circuit during the ministry of Samuel Tillotson. At that time there was a continuous revival in the Circuit, and he was under conviction of sin for some time, finally “winning through” in a prayer meeting after a service conducted by William Gilbert, a local preacher from Madby.

About 18 months afterwards James removed to Didby, and here he soon commenced preaching. His first text was John 3, 16, and during the service one lady became so elated, that she commenced leaping and shouting “My soul believes it,” knocking over tow forms in her ecstacy. The hearers were not quite so staid then as they are now.

After the chapel was built at Didby, William Woodhouse, James’s eldest brother became Society Steward, but after an interval James was appointed, and has performed the duties ever since. He cherishes precious memories of the ministries of such men as William Evans, Samuel Peake, Thomas Bramall, Charles Smallman, and John Smith. For years Didby was a great centre of influence, providing our church a large number of local preachers, and at least one well-known living minister, viz., Rev. Arthur Beavan.

Note: James lived at Didley, Allensmore, Herefordshire, in the Parish of Treville St Devereux, not Didby as stated in the sketch.

James married Ann Pritchard (abt1832-1925) in the summer of 1856 in the Hereford Registration District.